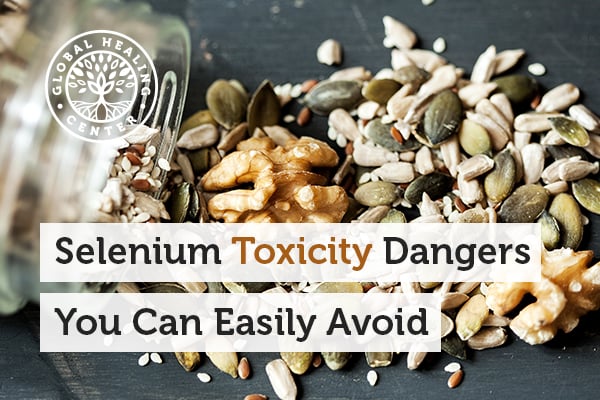 Selenium is an essential nutrient that the human body requires in order to function normally. And, like all nutrients, selenium can reach a point where enough becomes too much and it begins to hurt rather than help. Your body needs what it needs; more isn't necessarily better. In fact, if you consume too much selenium, you can experience selenium toxicity, also known as selenium poisoning. As you might guess, this is the presence of too much selenium in the body.[1]

Research suggests that the adult human body can tolerate up to 600 micrograms (µg) of selenium per day for 18 months without experiencing adverse health effects.[2] However, the Food and Nutrition Board of the United States Institute of Medicine recommends that humans over the age of 14 limit selenium intake to 400µg per day.[3]

Selenium toxicity is actually more common in livestock than people. This is particularly true in the western part of the United States where the soil is rich in selenium. High selenium content in soil is absorbed by plants and passed on to livestock.[4]

Selenium toxicity is generally not a widespread threat to humans. The Agency for Toxic Substances and Disease Registry assigned selenium a “minimal” risk level.[5] In fact, selenium deficiency is far more common than selenium toxicity.[6] Selenium is usually excreted from the body naturally within 24 hours, although rare exceptions do occur.[7]

Should you be concerned about selenium poisoning? Let’s take a look at some of the most prevalent symptoms.

Selenium toxicity is often caused by over-supplementation[8] and can impact the human body in a number of ways. Some symptoms are more severe than others, but all represent a disruption in wellness. Here is a look, courtesy of the Journal of the American Medical Association, at some of the ways selenium toxicity can cause concerns.[8]

Many participants said that the nail issues, fatigue, and hair loss continued for at least 90 days. These are some of the milder symptoms of selenium toxicity. Unfortunately, other reported instances have included more troubling symptoms:

Selenosis outbreaks have not been reported in the U.S. but have occurred in some small villages in China.[14] These villages subsisted on a diet of high-selenium foods over a period of months or years. The reason no outbreaks have occurred in the U.S. can likely be attributed to a difference in diet. Americans tend to eat many different foods sourced from different locations, grown in different soils with varying nutrient levels. This helps avoid over-dependence on any one particular high-selenium food.

Now that you know a bit more about selenium toxicity, what do you need to know about avoiding it?

Avoiding the Risk of Selenium Toxicity or Deficiency

So, what do you need to do to avoid selenium poisoning? Not much! Actually, you’re probably already doing it. As I mentioned earlier, selenium toxicity is rare in humans. You have to consume large quantities over a prolonged period of time before it becomes a real concern.

Selenium is an essential nutrient and your body relies on it to function normally. You can’t and shouldn’t eliminate selenium from your diet.

As with so many other nutrients, selenium consumption is all about achieving balance. Most people receive enough selenium through their diet. Selenium supplements, such as our brand new, vegan-friendly food-sourced selenium formula, are available for those who don’t.

Wellness supports the body’s ability to carry out its normal physiological processes. Total wellness is what happens when the body receives the necessary nutrients in proper amounts. Remember the importance of this balance. Make sure your body gets the appropriate nutrients, including selenium, through a combination of diet and supplementation. Proper nutrition helps your body function normally and achieve total wellness.