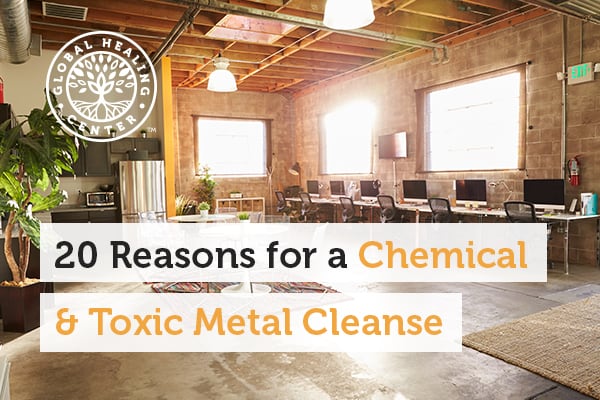 Every day, we are bombarded with chemicals that can have a negative effect on our health. This can include the development of cancer, as well as many other diseases. Below I list twenty reasons why everyone should consider detoxing their body of toxic metals and chemicals.

No matter who you are, where you live, or what you eat, you are constantly exposed to toxic chemicals in the environment. Once inside the body, chemicals and toxic metals cause production of harmful free radicals that poison the body, impair cell and organ function, and lead to serious health concerns.

You can minimize your exposures to chemicals as best you can, but in the modern world, it's impossible to avoid them. Eating organic food, purifying your water, and cleansing are the best ways to keep your body free of toxic chemicals. But in addition, I recommend detoxing your body from these substances using Global Healing's Chemical and Toxic Metal Cleanse Kit. If you try it, let us know how you feel!