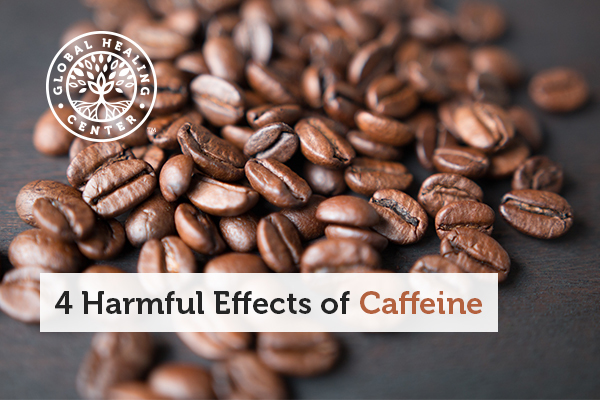 Whether you consume tea, coffee, sodas, energy drinks, or chocolate, you’re consuming some form of caffeine. This post is not meant to demonize caffeine altogether; in fact, at small amounts, caffeine has certain health benefits. It’s the excess use of caffeine that is an issue, as this compound can be addictive.[1] Caffeine doesn’t even provide true energy — it is merely a stimulant. Still, there are many who rely on it every day to get them going. Are you one those people?

Caffeine affects the body in a number of ways. Caffeine may promote dehydration and disrupt normal digestion. Additionally, caffeine is addictive and at the root of caffeine addiction is a physiological dependency that forms within the brain. Here is a deeper look at a few of the side effects that accompany caffeine.

Caffeine suppresses a chemical called adenosine, which is secreted by the brain to relax the body.[2] Suppression of this compound by caffeine affects the body by making it feel a tense surge of energy. While this surge of energy is truly stimulating, the threshold of stimulation continues to rise, making the brain require increasing levels of caffeine to simulate the same effect. This creates dependency on users who require caffeine on a daily basis to get moving.

Another negative effect of caffeine is dehydration. Caffeine acts as a diuretic, which may be a benefit to individuals dealing with bloating.[3] For others, however, caffeinated drinks are among the biggest contributors to dehydration — despite a high volume of liquid consumption with these beverages. Dehydrated cells have difficulty absorbing nutrients, and they also have concerns eliminating waste.

3. Caffeine May Exhaust the Adrenal Glands

Large amounts of caffeine can lead to adrenal exhaustion precipitated by the “rush” that it creates in the body. Adrenal exhaustion is particularly pronounced in children, who are now consuming more caffeine than ever before thanks to soda machines in public schools. The common symptoms of adrenal burnout include irritability, anxiety, trouble sleeping, hunger fluctuations, mood swings, and lethargy.

Perhaps the most negative impact caffeine has on the body occurs in the digestive system. It blocks the absorption of magnesium, a key mineral that is essential to the colon’s regulation of normal, healthy bowel movements.[4] Coffee itself compounds the concern by acting as a laxative, causing the bowels to move prior to the absorption of water and mineral nutrients. This reinforces body dehydration and malnourishment. Coffee also increases stomach acid levels, and higher acid levels can cause permanent damage to the intestinal lining.

How to Reduce Caffeine Intake

A better way to counter caffeine’s effects is to reduce your intake of coffee and soda and replace them with organic white or green tea (which contains minimal caffeine), organic fruit juice, or distilled water. Supplements that help cleanse the colon, rehydrate cells, and stimulate digestive enzymes are also recommended.