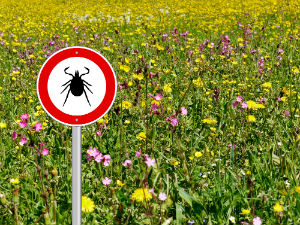 Lyme disease is not a new concern but it's only been in recent years that it's begun to get the attention it deserves. In my opinion, Lyme disease is perhaps one of the most serious, under-discussed health concerns in existence. Many people are aware that it's caused by tick bites that infect with a class of bacteria called Borellia and that a strange array of symptoms can result, including fever, headache, and fatigue. [1] But that's just the start, Lyme disease can affect the joints, heart, and central nervous system. [2] How these concerns can affect a person's life are almost unimaginable.

Let's take a look at 4 shocking and horrifying truths about Lyme disease.

As the leading tick-borne disease in the United States, Lyme disease, while treatable, can take time to diagnose. Its symptoms often look like those of other illnesses and sometimes come and go. Waiting for a diagnosis can be awful, like in the case of a healthy, active 12-year old girl from Montana who became “feverish, dizzy, and doubled over with stomach pains every time she tried to exert herself.” [3] In 6th grade, she missed a lot of school because of this; by 8th grade, she only attended her first day. Then we have a lawyer from Virginia who thought he had a bad case of the flu. Soon he felt so bad he was nearly immobile. It wasn’t until after fifteen months of treatment he began to feel better. It’s not just physical issues. For many, there’s an emotional toll. Imagine being sick with no diagnosis in sight, or just not being able to do anything you used to without feeling bad.

Call it what you will, but for many climate change has become a very real concern. What exactly does that have to do with Lyme disease? Well, warmer weather speeds up the tick’s life cycle, meaning many successfully reproduce before dying. [4] That means more biting ticks. In 1991, the US had 10,000 reported cases of Lyme disease; by 2013, that number was over 27,000. It’s not just the US that has seen a rise; our neighbors to the North have their fair share. At one time, no one believed Lyme disease could even be a concern in Canada, but warmer weather has opened the door for infected ticks.

If you thought Lyme disease was bad, be aware that there’s actually something even worse lurking in the bite of the lone star tick. Its bite won’t cause Lyme disease but it can release an antibody that can cause an allergy to a sugar called alpha-gal. [5] Found naturally in meats and in many products made from mammals, this sugar is practically everywhere. One person even had to stop taking her allergy medication because she was allergic to the added alpha-gal. Unlike with Lyme disease though, there is currently no treatment. The lone star tick bite can also cause the deadly Heartland virus, which also has no known treatment. [6] That’s just caused by one species of tick; there are still other tick-borne diseases that are much, much worse.

4. Mothers May Be Able to Transmit Lyme Disease to Children

Although the jury is still out, there is evidence to suggest that Borellia, the bacteria responsible for Lyme disease, can be passed along in the womb. [7] Take, for instance, the case of Justine Donnelly. All her life, she had struggled with poor memory and anxiety. Before she was born, her mother was diagnosed with what was thought to be viral meningitis. Since Mom got a little better with treatment, life went on. After thirty years of never feeling great, Justine’s mother got an actual diagnosis: Lyme disease. Because of that, Justine had herself tested, and the results were positive. While she could have gotten it elsewhere, Justine believes Lyme disease can be transmitted from mother to child. She’s not the only one: there are many firsthand accounts from doctors suggesting the same thing. So yes, while Lyme disease is very scary, a little common sense goes a long way. If you think you have symptoms, get them checked out. No one needs to suffer from this awful disease; and always remember to take precautions against ticks when outdoors!