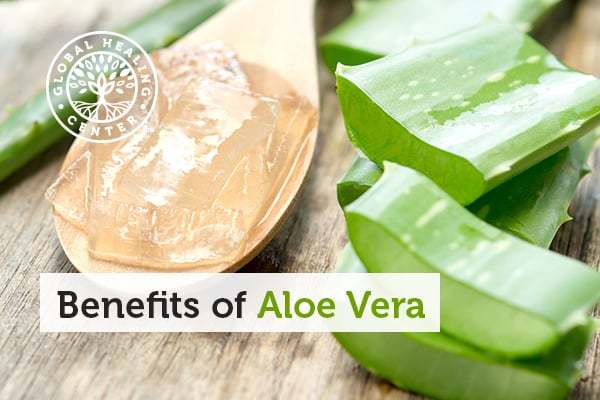 Although the gel of the plant is famous for its ability to take the sting and heat out of a sunburn, the beneficial properties of aloe vera, Aloe barbadensis, reach much further than skin deep. Ancient peoples have used this soothing plant for a wide range of applications, from controlling irritation to keeping wounds clean, and soothing gastrointestinal upset.[1] New research reveals that aloe vera’s healing capabilities may be more numerous than previously believed. It has a wealth of health-promoting compounds to offer nearly all of the body’s systems.

What Nutrients Does Aloe Vera Contain?

Though you might not think of it for its nutritional qualities, aloe vera is an all-star superfood. It contains a broad spectrum of essential nutrients and beneficial plant compounds. At this point, about 75 different nutrients have been identified.[2]

Though these aren’t necessary according to government guidelines, an overwhelming proportion of evidence suggests that many of these plant compounds support excellent health.[18] Aloe vera contains many phytonutrients that are involved in immune responses to damaged tissue, both on the surface and internally. Some of these phytonutrients include:[19]

Aloe vera contains at least eight different types of enzymes — alliinase, alkaline phosphatase, amylase, bradykinase, carboxypeptidase, catalase, cellulase, lipase, and peroxidase.[20] Bradykinase can help reduce skin swelling and irritation when applied to the skin.[21] Some of the other enzymes can help the body break down nutrients in the digestive tract and even prompt the recycling of damaged tissue in the body itself.

Additionally, catalase, an enzyme found in most organisms, protects cells from oxidative damage, which is implicated in many diseases, as well as the body’s aging process.[22, 23, 24]

There are extensive benefits that stem from regularly using and even eating aloe. These effects extend from the skin inward to your circulatory system. From here they can travel through the body promoting good health.

Part of a Healthy, Anti-aging Diet

As you saw earlier, aloe vera is brimming with micronutrients like antioxidants, which help slow the aging process at the cellular level. But that’s just the tip of the aloe iceberg. One study on women aged 45 years or older found that eating aloe itself improves skin elasticity, boosts collagen production, and significantly reduces wrinkles. Though the study was small, it found that sun-damaged skin and sun-protected skin both improved in appearance.[25]

Some studies have shown that aloe vera supports normal blood sugar.[26] Researchers reported that 5 active compounds in aloe vera reduced fasting blood sugar levels in mice up to 64% when consumed for four weeks. The same mice showed a 15% decrease in the A1C blood sugar levels.[20] This is significant because high blood sugar increases the presence of free radicals in the blood. It also increases damage to LDL cholesterol, which can lead to arterial plaques and the development of heart disease.[27]

Even better, consuming aloe may support healthy levels of fat in the blood. Some research has shown aloe vera encourages normal LDL cholesterol and triglyceride levels.[28, 29]

Acemannan, one of the active compounds in aloe vera, provokes the production of proteins that boost your body’s defense against foreign or old, malfunctioning cells. It also encourages greater specialization in your dendritic cells, which are the immune cells that call the police — other immune cells — when they see suspicious activity in their neighborhood.[2]

Aloe vera powder and gel is a common addition to natural skin products and cosmetics because it nourishes, moisturizes, and protects skin. Knowledge of these skin benefits has been widely applied for centuries, dating as a far back as ancient Indian, Roman, Greek, Iberian, and Arab folk medicine. Today, aloe is still used for relatively minor skin complaints, like an uncomfortable sunburn, but it can also soothe scratches, scrapes, burns, rashes, and other skin wounds.[19]

Multiple studies have confirmed that it supports the healing of skin wounds and stimulates cellular rejuvenation. The gel of the aloe plant contains a few different plant compounds that help promote normal skin health. Aloe enzymes support the production of collagen and help your body break down damaged tissue in wounds, while glycoproteins in the gel set the stage for new skin cells to proliferate.[19, 31] Additional research has found that it decreases healing time and for first- and second-degree burns. In human studies, aloe vera gel was found to improve skin integrity in dry, cracked skin and reduce irritation, wrinkling, and irritation from injuries.[32]

Aloe gel also promotes gum and dental health. It soothes swollen gums and protects them from irritating germs. One study found that swishing aloe gel in your mouth is just as effective at cleaning your mouth — if not more so — than commercial mouthwashes.[2, 33]

Another study indicates that aloe vera can help your stomach naturally cleanse itself of harmful organisms to promote greater comfort.[34] It also helps the cells in your stomach lining increase mucosal production to insulate them from gastric acid. Because of this protective effect, aloe is included in some ulcer medications.[35]

But aloe isn’t just for stomach health, it also promotes gut health. The acemannan in aloe is a complex sugar that you can’t digest, much like fiber, but your microbiota thrives on it. Nurturing the friendly bacteria in your gut with prebiotics like acemannan not only helps preserve your gastrointestinal health, it lays the groundwork for your overall health and well-being.[30, 36]

Protects You From Oxidative Stress

Aloe gel itself contains several antioxidants, like vitamins C and E, selenium, and a few phytonutrients that actively scavenge the free radicals that cause oxidative damage and accelerate the aging process.[19, 37]

Remarkably, the gel also helps your body produce antioxidants. One of your most powerful antioxidant scavengers is produced by the body, like superoxide dismutase (SOD) and glutathione, which neutralizes superoxides. Consuming aloe gel helps your body increase production of these cunning chemical allies that protect you from oxidative damage.[19]

Your hygiene and the foods you eat are strong determinants of how your body interacts with your microbiota — and how it affects your health in turn. The prebiotic potential of acemannan reinforces your natural defenses against harmful, opportunistic organisms that can compromise your health when your immune system is depressed, otherwise occupied, or when it's busy repairing other injuries.

Fortunately, aloe not only encourages the growth and health of beneficial probiotic colonies, but it also suppresses the same in colonies of harmful organisms in the skin, injuries, stomach, and the lining of the gut.[19, 34, 38]

The benefits of adding aloe vera to your diet are clear. Make this superfood, with its many vital nutrients and benefits, a part of your daily routine. Many people grow aloe plants at home so that they always have access to this incredible healing plant. It’s a low-maintenance garden and kitchen staple, and it grows easily.

For those looking for the convenience of something ready for immediate use, many aloe vera products, such as juices and supplements, are available online in and in stores.

When you take aloe vera in any form, the nutritional content and bioavailability of its key constituents, like acemannan and other phytonutrients, should be your primary concern. We’ve created an excellent aloe vera supplement called Global Healing's Aloe Vera, made from 100% organic inner leaf aloe vera. If you’re looking for a convenient, natural way to add aloe vera to your diet, ours is the best available.