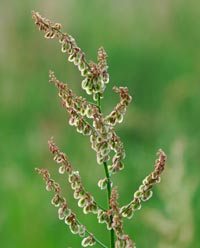 The benefits of American wormseed are primarily centered around its ability to help the body establish an environment that is inhospitable to harmful, invading organisms; which are attracted to weakened, unhealthy, toxin-ridden digestive systems. Wormseed, or Chenopodium ambrosioides, is an herb found throughout South America, Mexico, and the United States. The Mayans gave wormseed its name after realizing its efficacy in dealing with intestinal enemies. A tea made from the leaves has been used to provide a cleansing effect and to help expel harmful organisms from the body. The seeds have also been used to help the body purge predatory organisms. A German pharmacist first successfully extracted the true Chenopodium oil in 1895 and the therapeutic extract was officially listed in the United States Pharmacopoeia for more than 100 years.

Research has repeatedly shown that wormseed is effective against fungus. Wormseed contains a compound called ascaridoles, which is believed to be the most toxic to fungus. [1] At least two separate studies performed at India's Banaras Hindu University evaluated botanical essential oils for activity against funguses that cause skin infections. Wormseed oil was repeatedly confirmed effective at reducing proliferation of fungus that causes skin infections in guinea pigs. [2] [3] Additional research at the same university evaluated the efficacy of wormseed oil to control the growth of fungus on stored foods. Not surprisingly, it was found to completely inhibit the proliferation of fungus in an eco-friendly manner. [4]

DEET is an ingredient in many bug sprays and mosquito repellants. It's effective but it's also toxic. Wormseed oil, however, is one of many essential oils that have been examined as a natural alternative to DEET. [5] The odor that wormseed emits is an effective repellent against many insects, some people even plant it in their garden to act as an organic, chemical-free pest deterrent.

Snails can be another garden pest and, in some regions, even spread diseases like schistosomiasis, an intestinal infection caused by a worm. In fact, in Brazil, schistosomiasis is called "snail fever." Wormseed extract has also been identified as an effective method to dealing with schistosomiasis-transmitting snails. [6] Additionally, China Agricultural University in Beijing has reported that wormseed is toxic to German cockroaches. [7]

According to the Department of Anthropology at the University of Missouri-Columbia, wormseed is popular in Dominican culture to address intestinal invaders. [8] A 72-patient Peruvian study evaluated the efficacy of wormseed against harmful organisms. The patients were given extracts from the leaves and their stools analyzed before and eight days after consumption. Harmful organism toxicity was observed in more than half the subjects. [9]

Additionally, while many people prefer to keep their own bodies free of harmful organisms, it’s also important for livestock farmers to keep their animals free of invaders. When researchers in Brazil evaluated the efficacy of a menthol and wormseed combination on goats with roundworms, they found that the substance was able to reduce larvae population by more than 95%. [10]