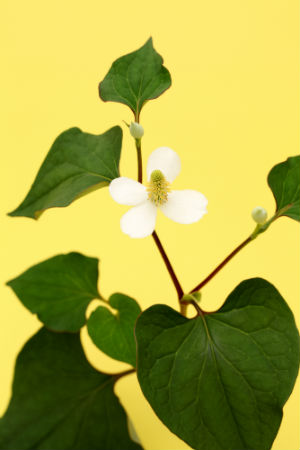 Dokudami is a perennial herb native to Japan, China, and Korea. It has a long-standing culinary use in Asian cooking and has been used for centuries in Ayurvedic traditional medicine. It's believed to offer positive benefits to the immune system and respiratory tract. However, its ability to support detoxification makes it a perfect ingredient my detox foot pads.

Known by its scientific name, Houttuynia cordata, dokudami is a flowering plant native to Asia. Dokudami grows mostly in dark, moist areas, sometimes submerged deep in freshwater areas. An invasive plant, dokudami can be found growing on hills, fields, and even between cracks in asphalt. It’s known as "fishy-smell herb" in Asia because when you press its leaves it produces an odor similar to that of fish. Dokudami also means "poison-blocking plant" in some cultures, and was often used for the exact same purpose. The leaves are heart shaped in appearance and used as a garnish for soups, meats, and cooked vegetables.

Researchers have examined the biological behavior of dokudami and extensive research has uncovered surprising revelations about its relation to human health.

When you're allergic to a substance, your body produces histamine, a compound that initiates an immune response. Studies demonstrate that dokudami has inhibitory effects on histamine release, possibly blocking it and reducing its effects. Researchers have even evaluated dokudami’s effects against allergies and asthma, issues partially characterized by excessive release of histamine. [1]

Dokudami contains polyphenols, potent compounds high in antioxidant activity that battle free radicals. Free radicals have a free, unpaired electron and are often unstable. They damage other compounds, cells, and DNA and research has linked free radicals to aging, cancer, and many other ills. Dokudami has been billed as an excellent free radical scavenger and helps neutralize circulating free radicals. [2]

Antibacterial is a buzzword that sounds good, right? Well, not so fast; not all bacteria is bad. In fact you need a balance of bacteria in your digestive system as good bacteria supports digestion, and that's only one application. A recent article has shown that dokudami promotes intestinal balance by discouraging harmful bacteria from thriving in the digestive system. [3]

Research has shown that dokudami may help support the immune system by stimulating the production of lymphocytes, white blood cells that are crucial for the body’s natural defense system. [4] These white blood cells are sometimes referred to as natural killer cells, and a plethora of research has found that these cells are important for promoting good health. Dokudami, in this case, should be seen as merely a natural component in an overall healthy lifestyle. Exercise, a vegetarian diet, and plenty of sunshine and sleep are also instrumental for supporting immune system function.

Why Do My Detox Foot Pads Contain Organic Dokudami?