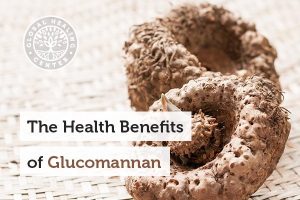 Glucomannan, or glucomannan konjac, is a supplement that’s used for maintaining a healthy weight, controlling blood sugar, and relieving constipation, among other health issues. It’s only recently become popular in the United States and Europe, but Asian cultures have enjoyed its benefits for thousands of years. The positive effects of glucomannan, including its impact on cholesterol and the immune system, have become the focus of extensive research.[1]

For the past two decades, the use of glucomannan as a dietary supplement and food additive has been on the rise in Europe and the United States. Japan, China, and Southeast Asia, however, have enjoyed konjac glucomannan as both a healthy food and traditional medicine for more than 2,000 years. The use of glucomannan can be traced back to an old Chinese poem from the third century. It is thought that Korean Buddhists brought it to Japan in the sixth century. In traditional Chinese medicine, glucomannan is believed to help with asthma, hernia, cough, burns, skin conditions, and other ailments.[2]

What Are the Health Benefits of Glucomannan?

Several clinical trials have evaluated the impact of glucomannan, and the results confirmed many beneficial effects. It's shown to:[3]

Additionally, glucomannan has the potential to act as a therapy for insulin resistance syndrome. It enhances the immune system in the gut. Glucomannan also has a positive effect on triglycerides, total cholesterol, LDL cholesterol, and fasting blood glucose.[4, 5]

Glucomannan’s claim to weight loss is owed to its ability to absorb water quickly and form a gel which fills the stomach, giving you a feeling of being full. Food calories that get caught up in this gel are more likely to be excreted out of the body rather than be absorbed. It also reduces the appetite-inducing hormone ghrelin.[6]

In most Western countries, more than 50 percent of the population have high cholesterol levels. A dietary fiber with significant cholesterol-lowering effects, either as a dietary supplement or as a natural component of the diet, glucomannan has the potential to promote normal cholesterol. A double-blind, placebo-controlled study found that daily ingestion of the herb resulted in the reduction of total cholesterol levels by 10 percent.[9]

Your pancreas releases insulin to lower blood sugar, breaking it down so that the body can store it for later or use it right away for energy. High fasting blood sugar means that your body is unable to complete this process effectively. Over the long term, this can lead to diabetes.

Several studies have evaluated the natural benefits of glucomannan for patients with diabetes. A 2006 study examined the effects of plant sterols and glucomannan on diabetic subjects. The results suggest that glucomannan combined with plant sterols substantially improves plasma LDL cholesterol concentrations.[10]

In another study, fasting blood glucose levels were significantly reduced after konjac food was ingested for one to two months, suggesting that konjac food may help promote normal blood sugar.[11]

Can Glucomannan Help With Constipation?

When it comes to relieving occasional constipation, glucomannan has much of the same potential as psyllium, a commonly used laxative. Constipation is a common condition in western countries, but dietary fiber, such as that found in glucomannan, can often help promote normal bowel movement frequency and consistency.

Occasional constipation affects us all at one time or another, but natural remedies can help get things moving again. In one study, adult patients with constipation took a glucomannan supplement. Due to glucomannan’s natural fiber, the patients reported a significant improvement after taking the supplement for only a month. The results were long-lasting and had no major side-effects. Researchers concluded that glucomannan could be an effective therapeutic aid in the management of constipation.[12]

Constipation is common in children and typically results from an unhealthy diet, a change in environment or schedule, or simply avoiding going to the bathroom. A 2004 study was done to evaluate whether a fiber supplement was beneficial for children who are constipated. It found that using a glucomannan supplement had a positive effect. Children who were already on laxatives still benefited from this fiber supplement.[13]

Whether it’s due to stress, lack of exercise, a low fiber diet, or the uterus pressing up against the intestines, constipation happens frequently to women who are pregnant. Some remedies normally used to control constipation, like laxatives, can cause uterine contractions and dehydration.

In one study, pregnant females affected by constipation took a mixture containing glucomannan twice a day for one to three months. This therapy resulted in normal bowel movements. As a bonus, because of glucomannan’s hunger control properties, some women who experienced disproportionate weight gain were better able to curb food cravings.[14]

Over the last 25 years, much attention has been given to the role dietary fiber plays in the microbiota, particularly concerning prebiotics. Observational evidence shows that a diet high in fiber is linked to a reduced risk of heart disease, diabetes, and obesity. These results may be related to the effect of dietary fiber on the gut microbiota and its ability to promote healthy gut bacteria. Most research has shown that dietary fiber, like glucomannan, positively affects the gut.[16]

Glucomannan is commonly available as a tablet, capsule, flour, or powder. Many people will simply take a capsule or tablet with water before meals or sprinkle a powder over their food.

Glucomannan is also a component of konjac flour, a popular ingredient in Asian cuisine. This flour is used to make a variety of noodles, most notably the shirataki noodle. Glucomannan as an ingredient is enjoyed for its texture, which tends to assume the taste of whatever foods with which it is cooked.[17]

Glucomannan is a powerful, bulk-forming supplement, so it’s best taken in small servings with plenty of water at first. You can gradually increase your serving size as your body acclimates. The recommended daily servings of glucomannan are:

This table is only a guideline, consult a healthcare provider before use to find a serving size that works best for you.

What Are the Side Effects?

Side effects of glucomannan are rare, but some people may experience an allergic reaction including rash, itching, difficulty breathing, and swelling of the throat and mouth. Other potential side effects include:

One thing to consider is that capsules may be safer than tablets. Tablets can stick to the back of the throat, causing difficulty swallowing. This issue worsens when water is taken to wash the tablet down, causing the fiber to expand further.

Some users of glucomannan have reported blockage of the intestines, and intestinal damage due to bloating.[19, 20]

Who Should Try Glucomannan?

Based on varying research and studies, glucomannan has been used by people who have constipation, high cholesterol, insulin resistance syndrome, type 2 diabetes, and people who want to lose weight and body fat. Although the benefits of glucomannan are many, consult your healthcare practitioner before beginning supplementation for advice and instructions.