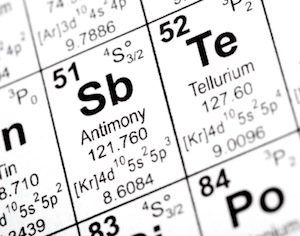 Antimony is a naturally occurring metal typically found in ore deposits. [1] Antimony is widely used in industry and present in all kinds of everyday items. Most commonly, the metal has been used as a flame retardant in products as diverse as toys, car seat covers, engine covers for light aircraft, clothing for kids, and uniforms for fire fighters. Beyond this, antimony is used to produce glass and ceramics, to make pigments, and in batteries. [2]

In comparison to other toxic chemicals and metals like lead, arsenic, barium, and aluminum, antimony doesn't get as many mentions. However, it should. Because antimony is widely used and present in so many everyday items, the health concerns caused by exposure to toxic antimony compounds are a real threat.

How Are We Exposed to Antimony?

Exposure to antimony compounds generally happens one of two ways: occupational and therapeutic. Exposure symptoms and the concerns that people may experience can differ greatly between the two. Additionally, although it's not often cited as a prime source, it is worth mentioning that the EPA has warned that drinking water with high antimony levels, over a period of years, could cause health concerns. [1]

Some people work in industries or locations where toxic antimony compounds are more prevalent and this puts them in greater danger of suffering from related health concerns. By far, those who have the greatest chance of coming into contact with toxic levels of antimony are port workers.

Why? Because antimony is used in brake pad systems for heavy weight vehicles, and port workers are exposed to that kind of traffic on a daily basis. The toxic compound is emitted from port vehicles and the workers breathe it in through their lungs. In one particular study researching antimony in the blood, a group of dockworkers had the highest levels of antimony ever reported. [3]

Perhaps the most frightening aspect to occupational exposure is the prevalence of additional toxins that co-exist. If an industrial plant has antimony present, isn't it reasonable to assume other toxic compounds may be around too?

Surprisingly, one occupation that doesn’t show toxic levels of antimony is firefighting. Despite the fact that firefighters have been wearing flame-retardant uniforms that contain antimony since the 1960s and several people have raised concerns about this over the years, several studies have shown that fire retardant clothing doesn’t raise antimony toxicity levels. [4] [5]

A second group of people at risk for antimony exposure is patients suffering from schistosomiasis and leishmaniasis. Antimony is used as a part of the therapy for these conditions and can sometimes have toxic side effects that lead to pancreatitis and cardio toxicity. [6]

In general, how your body reacts to a toxic level of antimony will depend on how you were exposed. Those who breathed in the compound, like the port workers mentioned above, may suffer from symptoms like pneumoconiosis, gastrointestinal concerns, antimony spots appearing on their skin, and respiratory irritation. However, if you come into contact with actual antimony dust, you can experience symptoms like depression, dizziness, headaches, vomiting, kidney damage, or liver damage. One compound — antimony trioxide — is even believed to be carcinogenic, and antimony poisoning has also been known to lead to Adams-Stokes syndrome. [6]

Efforts to Reduce Exposure to Antimony

Over the last few decades, workplaces have instituted guidelines that have reduced the incidence of antimony poisoning, and therapeutic drugs with antimony undergo strict quality control measures. In addition, patients are continually monitored to ensure that their antimony readings stay within acceptable levels. [6]

And while the EPA and EU both have water standards for antimony they claim are well below toxic levels, those in the UK may want to be careful drinking juice concentrates. There are no set standards and, just a few years ago, researchers discovered antimony levels that far exceed tap water requirements. [1] [7] [8]

Governments now monitor bottled water since toxic antimony can leak from the plastic bottles into the water. California even passed a law in 2009 requiring testing, despite the fact that the levels in bottled water are actually below those of tap water. [7] [8] [9]

Mitigating Your Own Risks

Reducing your exposure to antimony, or any toxin, requires you to take an inventory of your life and determine exactly where you're receiving exposure. Are you drinking purified water? Do you have a water treatment system in your house? Do you work in an environment where antimony is present? You need to address these issues at the source. Once you've eliminated sources of toxins in your life, cleansing your body may be the next step to a cleaner, healthier you.