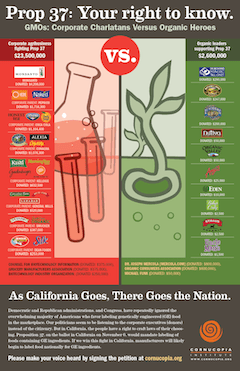 Right now, a debate is happening in California concerning Prop. 37, an initiative to be on the ballot in November 2012. Prop. 37 is an effort to mandate that foods containing genetically engineered ingredients are labeled as such. This is already required in Europe and, quite frankly, should be a no-brainer. The citizens of California, and, really, the entire country, should have the right to know exactly what they're purchasing and subsequently putting into their bodies. You, personally, should have that right. Knowing what your food contains should not be a mystery.

There Should Be No Debate

Preliminary polls suggest that California voters agree, an overwhelming 70%+ are in favor of GE labeling. Who isn't in favor? You guessed it, certain, unsavory, food industry corporations.

It probably goes without saying that if a company is producing "food" that essentially was derived from a lab experiment and is void of nutrition, they probably would prefer the sedated masses just continue to unknowingly and quietly consume their toxic wares. It's not morally right, but is justified by the effect a warning label may have to the bottom line. Unfortunately, many large corporations will never be accused of doing what's best for their customers.

Mainstream food industry corporations are fighting this initiative tooth and nail, well over $20 million has already been contributed by the food industry to defeat Prop. 37. That proverbial barrel of slime known as Monsanto is the largest contributor, over $4 million. It's disappointing but it's honestly not very surprising. What you might be surprised to learn though is that several brands whose images are "trusted," "natural," and "organic" are also trying to squash Prop. 37.

Who hasn't seen the feel-good commercials from Kashi or seen their literally, and metaphorically, crunchy cereal product in the supermarket? They claim it's great quality and their marketing and advertising looks very responsible, surely it must be, right? Wrong. Kashi cereals contain GMOs and the company is owned by Kellogg, who contributed $612,000 to defeat Prop. 37. Kellogg also owns the brands Gardenburger, Bear Naked and Morning Star.

Have you ever eaten a Larabar or bought from Cascadian Farms Organic? Unfortunately, what leaves a putrid taste in my mouth is the fact that their parent company, General Mills, contributed $520,000 to defeat Prop 37.

They aren't the only ones to blame. Smuckers, which owns Santa Cruz Organic and R.W. Knudsen, kicked in $387,000.

It is difficult for smaller, honest collectives, and certainly for the honest individual, to compete with a war chest like that. Just as the politician who spends the most during an election will often get elected, corporations that pump a pile of money into defeating measures like Prop. 37 are also able to purchase the outcome they prefer. Right now, GE labeling proponents have only raised about $3 million. Admittedly, this is quite small in comparison. Well, guess what, the fight isn't over.

YOU Can Take Action

It's time to fight back and tell these corporate clowns that we've had enough, that YOU have had enough, and we're not going to sit back while nutritional labels are manipulated and corporate conglomerates view American citizens as walking cash registers. You need to speak up and join the fight, nobody is going to do it for you. Let these companies know you don't appreciate what they're doing. Let them know you're officially boycotting their wares until they stop the dishonest behavior. We teach five year olds it's wrong to lie; that foundation should not evaporate simply because someone grows up to become a corporate fat cat who explains away their bad behavior with flow charts and investment reports.

"Hiding the truth about our food is pervasive, unethical, and only done for money," says Michael Potter, CEO of Eden Foods, an organic food manufacturer that financially contributed to support Proposition 37. I could not agree more. If you're with us, get on board. Please make your voice heard and tell the corporate players opposing your right to know what’s in your food that if they want your business, they can’t sell-out organic values.

You can donate money to the cause here:
https://www.organicconsumers.org/funding

Thank independent organic businesses that have put their money where their mouth is. Ask large organic brands and companies that are missing in action to pony up. Talk is cheap.