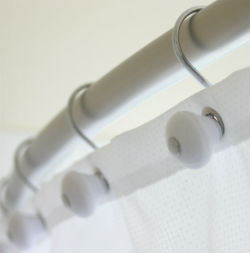 Have you ever noticed how a new shower curtain smells? There is a distinctive odor in shower curtains pulled fresh from the packaging. This noxious odor is plastic softener, a potently hazardous chemical compound that may do more than soften shower curtains.

Today, companies selling many of our daily household products spray these products with a plethora of chemicals meant to soften the plastic, sterilize, and keep things from going up in flames. One of the many downsides to this practice is that we are coating our household items with toxic chemicals.

In fact, a scientific study from a conglomerate of environmental agencies such as The Center for Health, Environment and Justice's (CHEJ), People for Puget Sound, the Washington Toxics Coalition, the Toxic-Free Legacy Coalition and the Work Group for Safe Markets, found that toxins coating shower curtains, flooring, and many common children's toys can lead to low birth weight in babies.[1]

The study also confirmed that these items might be linked to other serious health concerns in both children and adults. It was demonstrated that these items, commonly bought at stores such as Wal-Mart, Target, Sears, Kmart and Bed, Bath and Beyond, were coated in toxic chemicals linked to liver failure, nervous system disorders, respiratory issues, as well as poor reproductive health. Researchers found that plastic shower curtains from the stores all contained very high amounts of phthalates, a chemical which has been scientifically linked to birth defects.

The Environmental Protection Agency has publicly demonstrated that seven of the chemicals found in shower curtains are hazardous air pollutants, and yet companies can still sell them to uninformed consumers? One of the chemicals, vinyl chloride[2], is a well-known carcinogen that has been shown to cause to liver cancer in humans in scientific studies[3]. The VOCs found in these curtains was over 15x higher than the recommended amount the Washington State Indoor Air Quality Program recommends for households.

The study on birthweight shows that these chemical plastic-softeners have a devastating effect on the health of newborn babies, as the chemical mimics female estrogen. If a pregnant mother breathes these chemicals during her shower, it may be interfering with the development of the fetus.

The study found that the fetuses were particularly vulnerable to what the mother was breathing in during the developmental stages of the first trimester. What is of greater importance, these business practices or the health of our unborn children?

Currently, society exposes pregnant women to a whole host of chemical toxins. This includes everything from cleaning products to the flame retardants on mattresses.

How Can We Avoid This Scenario?

Do not buy shower curtains that contain these chemicals. Look for labels that say PVC or "vinyl" and avoid them.

The more flexible the shower curtain seems, the more likely it is to contain plastic softeners. Look for a shower curtain made from natural substances, like organic cotton. There are many stores that sell these organic curtains.

This is especially important if you are pregnant, or planning on getting pregnant, as the first three months are crucial to your baby's development.

I recommend you choose household cleaning products, deodorants, make-up and other cosmetics that are chemical-free. This will help ensure your baby's healthy development.