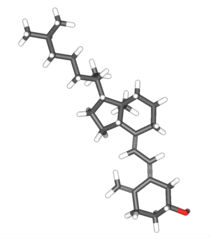 There are plenty of good reasons to make sure your body gets enough vitamin D. Most people associate it with calcium absorption for maintaining strong bones and healthy, better-looking hair. Others think of it as a way to protect their cardiovascular health and prevent neurodegenerative disease, such as Parkinson’s and Alzheimer’s.

But, if the findings of a recently published study by researchers at John Hopkins University in Baltimore is correct, it could give vitamin D a whole new level of importance for people suffering from certain types of inflammatory spinal cord disease [1].

With this in mind, the research team at John Hopkins decided to take a closer look at the vitamin D levels of patients suffering from similar forms of inflammatory spinal cord disease, such as transverse myelitis (TM), and neuromyelitis optica (NMO), which affect the myelin sheath that protects nerve fibers in the spine and the optic nerves, respectively.

Unlike MS, TM and NMO are generally monophasic — meaning that they typically have only one active stage — and their symptoms do not generally change or progress over time. These conditions, by their very nature, are either active or in remission. They also tend to have much more severe and less predictable flare-ups than MS and other multi-stage spinal conditions.

After reviewing vitamin D blood serum levels in a total of 77 patients of varying age, sex, and racial background, they found a strong correlation between vitamin D deficiency and recurrent forms of inflammatory spinal cord disease.

While further investigation is still needed before any conclusive connection can be established, these initial findings suggest that, at the very least, vitamin D plays a key role in maintaining the health of protective tissues inside the spinal cord.

?Despite being naturally produced by our skin in response to sunlight, and being readily available in both organic and fortified foods, a staggering number of people remain vitamin D deficient simply because it is so difficult for our bodies to absorb and utilize.

Choosing a high-quality dietary supplement, such as Global Healing's Vitamin D3, can be a great way to make sure your body has access to enough Vitamin D. Not only is it incredibly convenient and easy to use, it’s also completely natural and more bioavailable than any other product on the market.