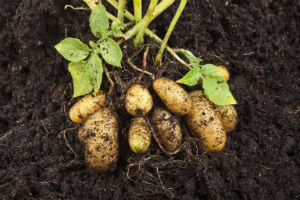 It seems that every day we’re hearing about a new GMO food product getting ready to enter the market. A new brand of genetically-modified potato called Innate is one of those products, produced by one of the largest suppliers of potatoes for McDonald’s restaurants. These potatoes are used for french fries. Simplot, the company producing the new GM potato, is attempting to convince consumers that the product is not only safe, but provides important benefits. One of these benefits include the potato being bruise resistant, which really isn’t a benefit at all for consumers.

Innate potatoes are also said to produce less acrylamide when exposed to high temperatures. Acrylamide is a potential carcinogen and is often produced when deep frying potatoes to make french fries. While this is a potential benefit, the company is implying that the genetically-engineered potato is healthier than what nature can provide. This backward logic is confusing many consumers, despite the data that GMOs are damaging to health and the environment. What Simplot isn’t divulging, however, is that the technology used to make Innate potato is considered potentially more damaging than the technology used to make Roundup and Bt crops.

As with any movement against GM crops, your voice is all that is necessary for promoting change. One voice may not be enough, but it does contribute to the rising multitude of people all across the world who oppose these unnatural products. To make your voice heard that will fight the introduction of Innate potatoes into fast food, head on over to the Organic Consumers Association and sign the petition urging the CEO of McDonald’s to consider looking for potato sources elsewhere. Your voice can make a difference! If you’re against GMOs and the implementation of these foods on unsuspecting consumers, sign the petition today!