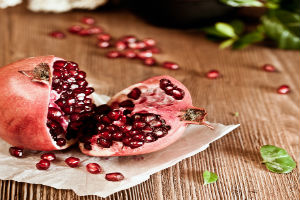 The CDC estimates around 5.3 million Americans are living with some form of Alzheimer’s disease, and that number is expected to double by 2050. [1] Dementia, a generalized term used to describe neurodegeneration, is a disabling issue that have definitive roots in lifestyle and nutritional habits. While genetics may play a role in brain health, it’s lifestyle that is the driving force behind the progression of hereditary variables. A recent study is suggesting pomegranate, a red deciduous fruit rich in polyphenols, may be a potent protector against mental degeneration.

The Wonder Power of Pomegranate

One of the main factors in Alzheimer’s disease is the formation of amyloid plaque in the brain. This plaque divides irregularly and leads to beta amyloid, proteins that clump together and prevent proper cell-to-cell signaling. Certain metals – aluminum in particular – have been strongly implicated in the deposits of beta amyloid. [2] Research shows that exercise may reduce the extracellular accumulation of this plaque in the frontal cortex, possibly slowing or preventing the progression of Alzheimer’s and dementia. [3]

A recent study looking at the effects of freeze-dried pomegranate found the fruit inhibited the formation of these plaques as well as the swelling of irritation in the brain normally accompanying Alzheimer’s disease and dementia. [4] Pomegranate is a highly-concentrated source of antioxidants, and it’s this fact that may be one of the contributing factors to the fruit’s neuro-protective properties. Pomegranate extract may provide even more benefit than the whole fruit, since it’s much more concentrated.

How to Protect Your Brain

Other than consuming pomegranate and small, antioxidant-rich berries, there are certain lifestyle habits you should adopt to protect the long-term health of your brain. As previously mentioned, exercise is essential for preventing amyloid plaque buildup. Getting enough sleep and managing blood sugar levels also appears to have beneficial effects on brain health. In fact, research shows Alzheimer’s disease is another type of diabetes, where the brain has a difficult time utilizing glucose for energy. [5] Reducing your grain and refined sugar carbohydrates could be helpful in this regard. Also, keeping your heart health in check may be helpful, as studies indicate atherosclerosis significantly raises dementia risk. [6]

What are you concerns with dementia? What steps have you taken to protect brain health?