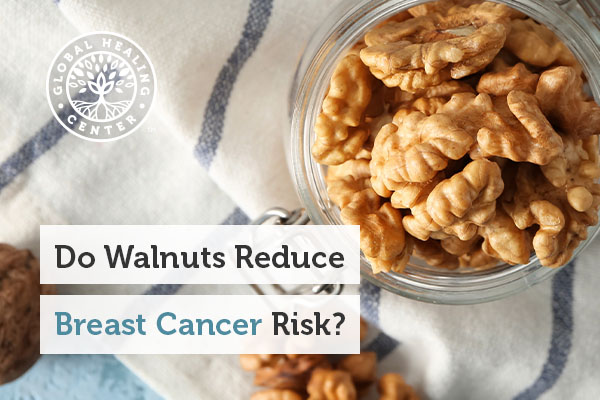 Research by investigators at Marshall University’s Joan C. Edwards School of Medicine, in West Virginia, suggests that regularly eating a few ounces of walnuts could significantly reduce the risk of breast cancer in women [1].

For their initial study, the university research team compared instances of breast cancer in several groups of laboratory mice that were genetically modified to be born predisposed to developing breast cancer.

All of the mice in the study’s experimental groups received the human equivalent of roughly two ounces of walnuts per day. Mice in certain experimental groups were also nursed from mothers who were fed this same walnut-fortified diet, before starting the diet themselves. Otherwise, mice in each of the groups were fed a standardized diet that was identical to that of the walnut-free control group, with the exception that small adjustments were made to ensure total fat intake remained consistent, regardless of walnut consumption.

Mice in both walnut-fortified test groups (pre and postnatal, and postnatal only) showed reduced instance of breast cancer. The mice that were fed walnuts starting at birth, showed nearly a 50 percent decrease in overall cancer formation, as compared to the walnut-deprived control group. Furthermore, instances of tumor formation that did occur within this group were observed to be smaller and less severe, on average, than those found in the other test groups.

After observing such strong improvements in those groups that regularly fed on walnuts, particularly those that received walnut micronutrients intravenously before birth, the Marshall University research team further investigated the source of these beneficial cancer-fighting properties.

Walnuts are often cited as being a rich source of vitamin E and omega-3 fatty acids; both are well-known for their ability to help lower the risk of many types of cancer. Still, the reductions in instances of breast cancer they observed in their test mice go well beyond those generally associated with omega-3.

What could account for this dramatic change? Dr. Elaine Hardman, lead author of the study, said further investigation revealed that walnut consumption appeared to have a direct effect on multiple genes believed to be connected with breast cancer in mammals, including mice and humans.

Additional investigation with humans will still be needed before the connection between walnuts and breast cancer is fully understood. However, the possible benefits of their consumption should be enough to encourage us (especially those who are expecting a new baby) to eat and enjoy them as a regular part of our diet. Walnuts should always be eaten raw and from a certified organic source.