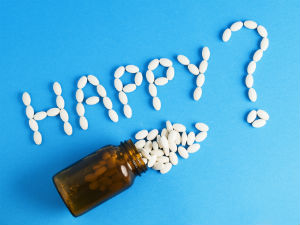 The brain is a complex organ, controlling our actions, cells, and emotions. When we mess with the brain, either inadvertently or with pharmaceutical medications, we can only expect a negative consequence in the process. If our body is exposed to toxins on a consistent basis, then there’s no doubt that our brain is too, and these environmental toxins – like aluminum and PCBs – are contributing to everything from Alzheimer’s disease to ADHD. [1] [2] Interfering with brain chemistry through the use of psychiatric medications is equally as harmful, more so than many people realize.

Antidepressants and Violent Behavior: What Nobody is Talking About

The mind is prone to neuroses, particularly during stressful or traumatic times. Using psychiatric drugs to “treat” depression is more often than not a bandaid approach, and only addresses the biological symptoms of depression rather than the root cause. Instead of addressing nutritional concerns and psychological barriers to personal happiness, many people are doped up on SSRIs, tranquilizers, and similar drugs. Research over the past few years has steadily shown a strong correlation between antidepressants and homicide. World Psychiatry published a recent study confirming past research, making it startlingly clear: psychiatric drugs may ease depressive symptoms, but they possibly increase a person’s chances of exhibiting violent behavior. [3]

You’re probably aware of the mass shootings across the nation in recent years, and many people are left wondering what could be causing the uprising of these violent crimes. Gun control is seen as a solution to this concern, but what if the issue is much more covert? Taking antidepressants is considered normal in this day and age, and no one questions their use. But could it be that this overly-prescribed pharmaceutical is altering minds to a greater degree than we’ve ever imagined? The antidepressant trazodone, for example, was given to a man who shot and killed 12 people at a Navy facility in Washington, D.C. Trazodone carries with it a list of side effects, including suicide behavior, panic attacks, worsening depression, aggressive behavior, impulsive behavior, and abnormal excitement. [4]

The Real Causes of Depression

While many wish to brush off one example of antidepressants and violent behavior as a mere coincidence, we can’t ignore the many other cases of suicides, murders, and violence in the country at the hands of those drugged with these psychiatric pharmaceuticals. [5] Depression isn’t a Zoloft deficiency; it’s a real illness that, at its root, contains one or more causative factors. Improper nutrition is virtually ignored by today’s psychiatrists, but it just so happens that all neurotransmitters responsible for mood stabilization require nutrients for proper functioning. Tryptophan, for instance, requires zinc, copper, B vitamins, iron, and magnesium in order to perform efficiently.

Another hidden and rarely discussed factor related to depression is mold exposure. Mold can remain hidden in a home for years, but the effect it has on your health is insurmountable. Studies have shown that mold exposure, whether you know you’re being exposed to it or not, contributes to neurobehavioral issues. These health issues include worsening memory, mood impairments, and even Parkinson’s disease-like symptoms. [6] [7] [8]

When it comes to psychiatric illness, it is up to you and your doctor to find the best way you can to improve your wellbeing. Always keep in mind that there are a number of components playing into disease, including mental illness, so speak to your doctor and do your research to determine the plenitude of factors associated with your particular case. If you are taking pharmaceutical drugs for any kind of mental distress, it is important to not stop taking them, because this action could lead to adverse symptoms, including worsening depression. Supplementing with probiotics can also be a helpful measure, as could physical exercise, meditation, and socialization.