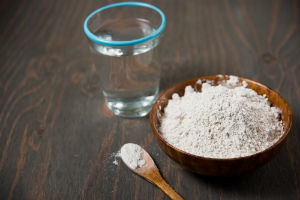 Diatomaceous earth (also called diatomite) is an off-white sedimentary rock that has been granulated into a chalky powder-like substance akin to talcum powder. It derives from fossilized remains of something called diatoms, which are a type of prehistoric tough-shelled, single-celled organisms similar to algae. [1] These diatoms are ocean based and, over the span of 50 million years, came to be embedded into the Earth’s crust. The fossil shape of diatoms is uniquely characterized by the diatoms' symmetrical or twin-shell structure. Diatomite was first discovered around 1837 in Northern Germany, and many interesting applications for the product began to be conceived. Alfred Nobel, the inspiration for the Nobel Prize, used the chemical properties of diatomaceous earth to invent dynamite.

Deposits of diatomite are found throughout diverse regions of the world, typically in lakes and marine areas. There are generally five common varieties of diatomite sourced throughout the world today: Tripolite (from Tripoli, Libya), Bann (from Lower Bann Valley, Ireland), Moller (from Denmark), freshwater lake regions, and saltwater.

Interestingly, each geographically-diverse deposit of diatomaceous earth has a different shape and structure due to the varying amounts and types of other minerals and clays in the surrounding earth composition. The silica content can vary within different deposits depending on age. There are even different species of diatomaceous earth which are also determined by the diatoms’ age and historic environment.

What is Diatomaceous Earth?

Two forms of diatomite are in use today: food-grade (unheated/unadulterated) and industrial grade (heated). Food-grade diatomaceous earth is naturally dried (termed "uncalcined") and has different properties and structure than industrial-grade diatomite. The heating of the diatomaceous earth for industrial use changes the structure from amorphous (unstructured, free-flowing) characteristics to a crystallized, structured form (calcined).

The overwhelming majority of diatomaceous earth is used in industrial applications, such as:

Though the majority of diatomaceous applications are industrial in scope, an increasing area of interest for its use lie in human and animal applications, particularly for its exciting benefit as a safe and effective anti-parasitic. Data suggests that food-grade diatomaceous, which is rich in silica content, may have positive effects on skeletal health and metabolism.

Up to one-third of diatomite's natural silica content is rendered bioavailable for the nutritive trace mineral silicon, among other trace minerals including boron, manganese, and copper. Additionally, diatomite contains a rich electrolyte mineral content consisting of up to 19% calcium, 5% sodium, and 3% magnesium, depending on deposit variables.