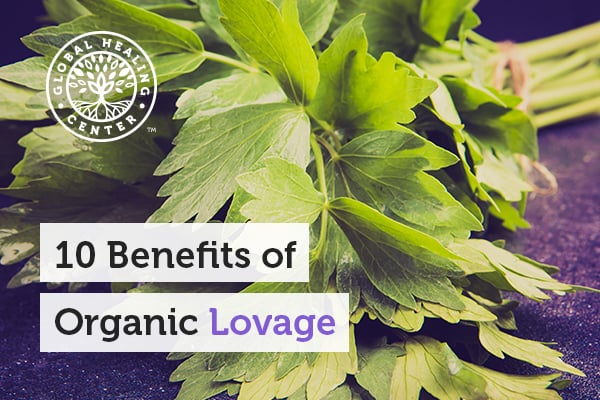 Lovage, a member of the parsley family, is a widely-used herb in parts of Europe and southwest Asia. Its use in food and natural healing is nothing new, but it's also not usually first mentioned, so it isn’t surprising if you haven't heard of it. Lovage offers a number of health benefits, including supporting kidney health, fighting harmful organisms, and supporting joint health.

While science continues to explore the many benefits of lovage, there are some researched benefits that are worth a look.

1. Fights the Risk of Kidney Stones

Lovage is an aquaretic, or a type of diuretic that encourages urination without electrolyte loss. The increased urination flushes the urinary tract to potentially help avoid kidney stones.

Traditional medicine uses lovage to loosen phlegm in the lungs, which in turn improves airflow, breathing, and oxygen intake. In one trial eucalyptol, the active chemical compound in lovage that reduces lung irritation, produced significant, positive results within four days. [1]

It turns out lovage is loaded with compounds that may soothe rough patches in the body. Compounds in lovage that provide this benefit include limonene, eugenol, and quercetin. Studies involving limonene have shown it provides soothing effects throughout the body, although it has been especially noted to help reduce issues associated with colitis. [2]

Lovage is recommended as a natural way to fight skin conditions like dermatitis and acne. The exact mechanism of action is not fully understood, but traditional skin care approaches include lovage in their routines.

Scientists have found lovage one of the most potent extracts against organisms like E. coli, Salmonella, H. pylori, and H. influenzae. [3]

The soothing benefits of lovage are very effective and it's even a great remedy to soothe the digestive tract, reduce bloating, and relieve gas.

The herb is considered a natural remedy for joint discomfort associated with gout and rheumatic swelling of the joints. In addition, it doesn’t cause any terrible side effects.

The soothing effects of lovage naturally help fight the symptoms of allergies. But when it comes to allergies, lovage goes a bit farther. Quercetin, a compound present in lovage, inhibits histamine release and alleviates skin irritation typically caused by sensitivity to environmental irritants. [4] [5]

Among its many traditional uses, lovage is reported to provide relief from menstrual discomfort. Its high nutrient density combined with its powerful soothing benefits may explain why adding lovage to the diet prior to the beginning of a menstrual cycle may support well being.

Lovage is a wonderful addition to your favorite recipes, adding taste and increasing your meal’s nutrient value. It’s often used as a replacement for celery, although it’s more pungent so most recipes recommend using about half the amount of the celery called for. The leaves make an excellent salad, and the seeds are used as a spice and often sprinkled over salads and soups. Lovage can even be brewed as an herbal tea. It’s rich in B-complex vitamins, essential for energy, and vitamin C which supports skin and immune system health.