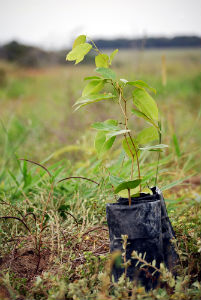 Jatoba (Hymenaea courbaril) is a tree indigenous to the Amazon rainforest and Central America that can grow up to 90 feet tall and contributes to the rainforest canopy. Jatoba produces a dense, hardwood that is durable and termite resistant, making it very useful for carpentry, flooring, and furniture. One of the most interesting things about wild jatoba is that when the tree's life cycle is finished and the tree dies, unlike most other rainforest trees, the wood of the jatoba tree does not rot.

This observation of its resistance to mold and fungus has predicated inquisitions into the therapeutic qualities of jatoba... of which there are several. In fact, jatoba has been used for therapeutic purposes by traditional medicine practitioners for many concerns, including diarrhea, hepatitis, bronchitis, and coughs.

Many of Jatoba's benefits are related to its toxicity against harmful organisms, including yeast, viruses, fungi and bacteria and most of its beneficial compounds are located within its bark. Not only does jatoba present itself as fierce opposition to harmful organisms, but also to swelling, as jatoba contains a wide variety of active compounds and phytochemicals that have demonstrated an ability to fight redness and irritation. [1] Traditional preparation is a tea prepared from the bark or a tincture which can be used for a variety of health conditions, including the candida fungus.

Jatoba is probably best known for its strength against fungi, including candida. However, research has shown jatoba to be toxic to other harmful organisms as well. In a Brazilian study designed to investigate jatoba for activity against the simian rotavirus, jatoba was active and described by researchers as definitely worthy of additional research. [2] Test tube evaluations of jatoba, performed by the Institut für Pharmazie at Freie Universität in Berlin Germany, have shown that jatoba is active against plasmodium (harmful organism). [3]

The compounds in jatoba are known to possess a strong resistance to fungus and yeast, which has caused some persons and researchers to approach it with extreme interest as a very effective topical application for addressing fungal infections such as candida, athlete's foot, and nail fungus. [4] [5]

Jatoba can also be taken internally and may offer relief for symptoms of chronic concerns which are believed to be fungal in their origin and do not respond to harsh prescriptions. It is in these instances where a natural, fungus resistant compound like jatoba has generated high interest. [6]