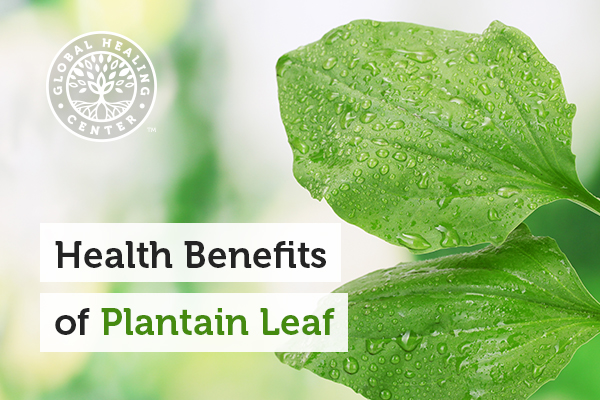 Not to be confused with the banana-like fruit of the same name, the plantain leaf (Plantago major) is a green, weedy plant native to North America, Europe and Asia. Cultures around the world have used the plantain leaf to help relieve health ailments for millennia. The plant is one of nine sacred herbs mentioned in the ancient Lacnunga ('Remedies'), a collection of Anglo-Saxon medical texts. During the 1500s and 1600s, it was used by Europeans for everything from dog bites and boils to fevers and the flu.[1] The major components of plantain are iridoid glycosides (particularly aucubin), mucilage,and tannins. Together, they are believed to reduce irritation, quell harmful organisms, and exhibit expectorant actions.[2]

How Is Plantain Leaf Used?

People in Colombia use plantain leaf to promote good health. The gastrointestinal category dominates its use in Mexico.[4] These are just a few of many examples of how plantain is used across the globe. Due to its long history of use across the globe, and recent confirmation of some of its therapeutic properties, plantain leaf is now used primarily as an herbal remedy for upper respiratory tract health.

Clinical Studies of the Plantain Leaf

Modern science is just beginning to study the effects of the plantain leaf, and studies are confirming some of these traditional uses.

The German Commission E, which is similar to the United States’ FDA but regulates herbs and their medical use, approved the internal use of plantain leaves to ease coughs and irritation of the mucous membrane which are associated with upper respiratory tract infections.[5] They found that experimental research confirmed its beneficial properties, which can help reduce the irritation of lung tissues that cause discomfort. It can also help to stimulate the immune system. They recommend the plantain plant for moderate chronic irritative cough, especially for children.

Two clinical trials in Bulgaria documented the plantain plants efficacy for chronic bronchitis.[6] It acts as a demulcent, such as pectin and glycerin, which are common ingredients in cough syrups and throat drops. Demulcents relieve minor discomfort and irritation by forming a soothing film over the affected mucous membrane.

This property can also make the plantain leaf an effective relief for coughs caused by the flu, cold, and irritation. Since demulcents can cause more mucus production in the lungs, they are more often used to relieve dry coughs.

A study conducted in Taiwan, where plantain leaves are used in folk medicine for various infectious ailments related to the respiratory, urinary, and digestive tracts, found that hot water extracts from the plant showed resistance to harmful organisms.[7] They also confirmed the immunostimulatory effects found by Commission E.

The Department of Microbiology and Immunology at the Universidad Nacional Río Cuarto in Argentina also confirmed plantain leaf's resistance to harmful organisms when studying alcoholic extracts from 8 different plants.[8]

Research conducted by a Brazilian university found that three plants from the Asteraceae family, including the Plantago major, had some degree of activity against harmful organisms, including yeast. They believe this explains its use for many infectious ailments in Brazilian folk medicine.[9]