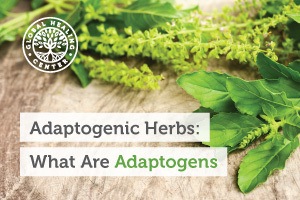 Adaptogens are natural substances that work with a person’s body and help them adapt; most notably, to stress. Adaptogens are a natural ally in dealing with persistent stress and fatigue because they work with regulating important hormones.

All these benefits can come from something as simple as adding adaptogens into your regular diet. While there are a number of ways to increase your adaptogen intake, consuming adaptogenic herbs is arguably one of the best.

There are a number of naturally adaptogenic herbs that you might consider trying on for size. They can be taken in capsulated supplement form, brewed in teas, or simply cut up and used to spice up a meal. For maximum health benefits, it’s best to include a healthy variety of these herbs in your diet. Here are some of the most popular adaptogenic herbs and their traditional uses.

A member of the mint family, this herb has soothing properties and has been used for centuries for good health. Its antioxidant properties support heart health and normal lipid profiles. It’s also a powerful weapon against stress. [6]

The active compound in milk thistle, silymarin, supports liver health and metabolism that helps manage the hormones associated with stress.

Also called Indian Ginseng, studies from India shows that those who take this herb enjoy dramatic improvements in how they handle — and feel — stress. It’s also taken to keep the mind sharp, and for energy. [7]

This herb is popular among the Sherpas who work on Mt. Everest because of the way it supports regular energy levels and fights altitude sickness. Studies also show it helps encourage normal cortisol levels as well as energy levels. [8]

Commonly called Siberian Ginseng, the Eleutherococcus senticosus plant is known for not only its adaptogenic properties but also as a natural energy booster.

You’ve probably used rosemary in your cooking, but this herb does a lot more than add flavor and fragrance to your meals. Research shows two of its compounds, caffeic acid and rosmarinic acid, support heart, digestive, and liver health. Traditional medicine from around the world has used it for centuries to relieve stress. [9]

Researchers have taken renewed interest in aloe vera as a powerful herb and superfood. Two of its compounds, acemannan and aloctin A, support immune and adrenal health. [10]

Long used in both traditional Indian and Chinese medicines, this herb stimulates blood flow, helps reduce swelling, and is a powerful antioxidant. [11]

The Chinese have used astragalus traditionally to encourage good health and fight stress. Its active compound, called TAT2, protects against aging, supports detoxification, and is nutrition for the kidneys. [12]

The seeds, leaves, roots, and oils of the Moringa plant are used throughout Southeast Asia an ingredient in many common dishes. As part of traditional medicine, it supports the immune response, eases swelling, and promotes energy and adrenal health. [13]

This herb has been used in traditional Chinese medicine to promote good health and overall wellness. Research shows it has powerful antioxidant properties that help your body stay balanced. [14]

This popular Ayurvedic herb has been used for centuries to support brain health like memory, focus, and thinking. [15]

Licorice root has traditionally been used to promote many aspects of wellness, including normal metabolic function. [16]

How Do Adaptogens Work?

Now that we’ve mentioned some common herbal sources for adaptogens, let’s take a look at how adaptogens actually work. First of all, it’s important to understand that stress is only meant to exist in short bursts. It is a hormonal response that may have been responsible for helping some of your own ancestors escape from hungry lions (or maybe even face them!). Think about stress as what is commonly called your “fight or flight” response.

Today, most of us don’t have to worry so much about lions. However, most modern-day stresses are ongoing. When your adrenal system remains in a constant active state, it throws your body out of balance. Constant stress can wreak havoc on your body, especially on your digestive system and energy levels.

Adaptogenic compounds help mitigate the stress response. They work to bring the hormones of your adrenal system back into balance and overcome adrenal fatigue, a common condition of chronic stress. Studies show adaptogens like Rhodiola rosea and Schisandra reduce the presence and effect of stress hormones. [17] In this way, they help endurance during physical stress like exercise and return your body to normal when you’re faced with chronic stress.

Think of adaptogens like a thermostat. The keep your body’s stress response at a desirable level, much like the way a thermostat keeps the temperature from becoming too high or too low. They’re good for you all the time, not just when you have a high level of stress.

Have Adaptogens Benefitted You?