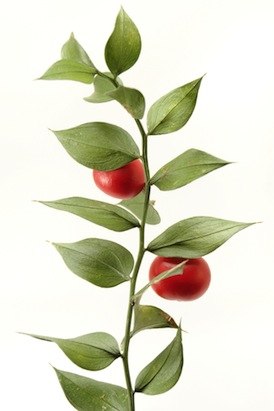 Butcher’s broom, or Ruscus aculeatus, is an evergreen like shrub with a long history of use in Europe for promoting circulatory system health. Among other benefits, butcher’s broom helps tighten blood vessels and capillaries, which has generated interest for use against varicose veins. It’s also been shown to relieve fluid retention and other symptoms of chronic venous insufficiency.

How Does Butcher’s Broom Work?

According to American University in Washington, DC, butcher’s broom activates receptors that stimulate the release of noradrenaline to increase vascular tone and constrict blood vessels. The constriction helps to get the blood moving and reduce pooling. Butcher’s broom contains flavonoids that also support normal circulation and strengthen blood vessels. [1]

Varicose veins and hemorrhoids are common and associated with a loss of blood vessel integrity. Thus, supplementing with herbs, such as horse chestnut and butcher's broom, that support the vascular system may help. Butcher’s broom is believed to improve both conditions by promoting healthy microcirculation, capillary flow, and strengthening connective tissue. It’s even been approved by the German Commission E (Germany’s version of the FDA) as a remedy for hemorrhoids and a 1999 clinical trial supported butcher broom’s reputation as a hemorrhoid remedy. [2] [3]

The Research: Does Butcher’s Broom Support the Circulatory System?

Swelling of the legs, or edema, is a major, problematic symptom of chronic venous insufficiency. German researchers organized a 3-month, double-blind, placebo-controlled study to investigate the efficacy of butcher’s broom extract for remedying leg edema. Reductions in leg and ankle swelling among participants were observed; leading researchers to conclude that butcher’s broom may have promise for people suffering from circulatory system concerns. [6]

In 2007, researchers in Mexico conducted an 8-week study in which 124 patients who complained of discomfort, leg heaviness, and edema related to chronic venous insufficiency were put on a daily regimen of two capsules of butcher’s broom. Within two weeks, reductions in complaints were observed. By the end of the study, no complaints remained. [7]

Although butcher’s broom is largely thought to be safe (and inexpensive), there are two caveats to mention before you add it to your nutritional program. First, concerns like chronic venous insufficiency usually have larger, underlying causes such as obesity or a history of blood clots. In such situations, it’s wise to consult and work with your trusted healthcare provider, rather than consult Dr. Internet. Additionally, chronic venous insufficiency and varicose veins can sometimes result from pregnancy, and pregnant women should consult with their healthcare provider before taking butcher’s broom, or any other herbal therapy.