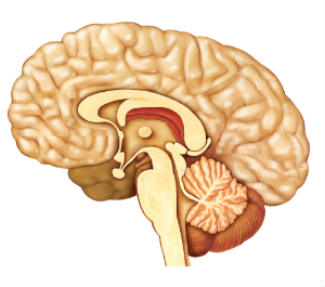 The pineal gland is a small, pinecone-shaped endocrine gland located near the center of the brain between the two hemispheres. It’s small, only 5-8mm, and is sometimes visible in head scans as calcification can occur due to toxin or fluoride accumulation.

Structurally, the gland is mostly made up of cell bodies called pinealocytes, which produce melatonin. Capillaries, neurons, and other interstitial cells are other structural components.

The pineal gland has been of interest to philosophers and spiritualists for centuries, some referring to it as the “third eye.” The pineal gland is unique in that it’s the only part of the brain that is a singular component, as opposed to having an opposite hemisphere counterpart. Because of this, the French philosopher Rene Descartes believed it was where the mental and the physical connected in our bodies, referring to it as the “principal seat of the soul.”

What Does the Pineal Gland Do?

The pineal gland is part of the endocrine system. Like other endocrine system glands, such as the pituitary and thyroid, its primary function is hormone secretion, specifically, secretion of melatonin.

Melatonin is important for sexual development, metabolic function, and sleep-wake cycle regulation. The pineal gland intelligently handles melatonin production in a couple of interesting ways. First, it’s in tune with circadian rhythms and releases more melatonin in the evening and less during the day. Second, melatonin is believed to prevent sexual development. This is illustrated in that children produce more melatonin and melatonin production slows down once puberty starts.

It’s an interesting side note that melatonin is a derivative of tryptophan, the component in turkey typically cited for turkey’s reputation of causing sleepiness.

Can The Pineal Gland Be Stimulated?

The connection of the pineal gland to enhanced states of awareness and consciousness has paved the way to a pursuit of exercise, herbal cleansing supplements and even meditation as a means to stimulate the pineal gland and experience more of its benefits. One of the first steps in this process is to engage in a detoxification. Substances like mercury and fluoride are extremely toxic and harmful to the pineal gland. Fluoride accumulation can even cause it to calcify and, effectively, shut down. As manufactured chemical compounds are also damaging to the pineal gland, performing chemical and heavy metal cleanses may be recommended as precursors to pineal stimulation.

When your body is in a clean and balanced state, there are exercises that can help strengthen the pineal gland and increase your chances of experiencing heightened levels of perception.

Ways to Stimulate the Pineal Gland

Do you have other suggestions or practices, which help to enhance the pineal gland?