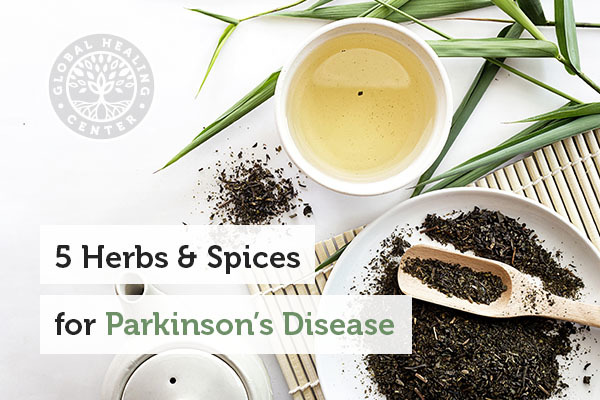 Parkinson’s disease, a chronic, degenerative disorder of the nervous system, results from dopamine-producing brain cell deficiency. Rather than spend time and money on allopathic treatments that can often do more harm than good, there are natural remedies you can take that may effectively combat Parkinson's. In particular, herbs and spices for Parkinson's disease are among the most researched.

Not many people can say a bad thing about organic green tea these days, and for good reason. In addition to aiding weight loss, fighting cancer, and helping with graceful aging, green tea shows signs of being able to help against Parkinson’s disease. Research by Dr. Baolu Zhao specifically indicates green tea’s polyphenols protect dopamine neurons [1]. In a similar study at the Seoul National University College of Medicine found that EGCG, the neuroprotective agent in green tea slashed the neuronal death rate by half when administered to mice [2].

Also known as Bacopa, this Ayurvedic herb is often used in the United States as water plants in aquariums. Some practitioners like Ray Sahelian, MD, advocate its use as a memory enhancement as it has been used for centuries in India. According to University of Maryland Medical Center studies, brahmi may improve circulation to the brain and even protect brain cells. Another study by Pennsylvania State University College of Medicine applied brahmi seed powder to rodent models of Parkinson’s. Results showed promise in conquering the disease and protecting the brain from damage.

A popular herb in India, cowhage, or kapikachu, is found in bushes of lowland forests throughout the country. It drew the attention of the University of Maryland Medical Center, which speculated that cowhage, which contains levodopa or L-dopa, might perform better than L-dopa administered as a drug against Parkinson’s disease.

We can’t stop talking about turmeric, and there’s many reasons why. Michigan State University researcher Basir Ahmad seems to be a fan of it, too [3]. He led a team of researchers who found that curcumin, a compound of turmeric, may help fight Parkinson’s disease by disrupting proteins responsible for the disease and preventing said proteins from aggregating.

While not performing as well as green tea in rigorous laboratory tests, ginkgo remains a potentially beneficial herb for Parkinson’s sufferers. In a 2012 study at the National Institute of Neurology and Neurosurgery in Mexico, a patented extract of ginkgo leaves were dispensed to animal models of Parkinson’s [4]. The extract showed neuroprotective and neurorecovery effects against midbrain dopamine neuron damage and even damage to locomotion. Researchers declared, “These studies suggest it as an alternative in the future treatment of PD.”

Certified organic virgin cold pressed coconut oil is also being used to aid the symptoms of parkinson's. People are getting good results with 1 tablespoon 2-3x daily.