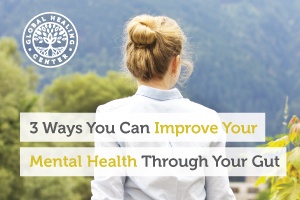 Have you ever thought of improving your mental health through the gut? If not, you should be. Your gut is where digestion begins, but it's also connected to your brain and at least 70 percent of your immune system. You simply can't be healthy if your gut isn't healthy. The "gut" is a general term that describes the entire digestive system. This includes the esophagus, stomach, pancreas, liver, gallbladder, small intestine, and large intestine (aka the colon). Your gut is packed with bacteria and home to 2,000 different species that make up the microbiome. The microbiome, also known as gut flora, improves your overall wellness, and new research shows that there's a solid link to supporting mental health. Plus, the gut is sometimes referred to as the "second brain" because of its ability to communicate with the central nervous system!

3 Ways to Improve Your Mental Health Through Your Gut

In one study, researchers fed probiotics — strains of good bacteria — to mice and suggested the resulting changes in the gut’s microbe colonies could ease feelings of anxiety.[1] A more recent study looked at prebiotics — carbohydrates that serve as “food” for that good bacteria — noting after three weeks, those who took a daily prebiotic supplement had an easier time sorting through anxious and depressed feelings.[2] Other reports suggested those out-of-whack bacteria levels could also be a cause of autism, suggesting probiotics as a therapeutic approach for autistic children.[3, 4]

2. Use Curcumin to Modulate Cytokines

And so while probiotics and prebiotics could improve the condition of your gut, there’s also recent evidence suggesting internal irritation plays a strong role in your mental health.[5] There are many things that could cause irritation in the gut — unhealthy diets and obesity are just two of many. The body, then, sends cells and proteins to the site of the concern. Recent research suggests people with depression are loaded with cytokines — one of the proteins in question. Taking turmeric may show some relief in reducing gut irritation as well as environmental damage to the brain.

3. Incorporate More Omega-3s Into Your Diet

At the same time there's evidence suggesting depression could be an allergic reaction to internal irritation, other studies suggest that supplementing with omega-3 and curcumin (an extract from the spice turmeric) could ease issues in the gut in much the same way as nonsteroidal anti-inflammatory drugs (NSAIDs).[6, 7] More and more doctors are looking at approaching irritation in depression protocols, rather than simply addressing the neurological aspect.[8]

There are quite a few people out there who never even felt anxious or depressed until they experienced gut issues, furthering the idea that the intestine – brain connection is very real.[9] IBS, for instance, can cause depressive-like symptoms in people, as can gluten intolerance.[10] Performing a colon cleanse routinely and supplementing with probiotics can help you maintain a healthy gut. I recommend my Colon Cleanse Program™, which helps you cleanse your digestive tract of toxins while supporting your gut’s colonies of beneficial bacteria.