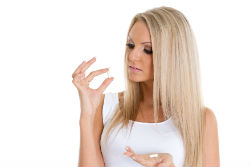 We all understand the desire to be vibrant, healthy and at our optimal weight. Sadly, however, in attempt to lose extra weight quickly, many people turn to weight-loss drugs or cheap supplements instead of the natural methods of weight loss which take more time but work more effectively in the long run. There are many over-the-counter weight-loss drugs that stimulate the metabolic process and suppress appetite through artificial means.

One of the most popular of these weight loss drugs is called Alli, a prescription-strength version of Xenical. This drug can currently be bought over the counter, even though it was investigated by the FDA because of orlistat, the weight-loss ingredient in Alli, that may cause liver damage.[1]

Sadly, this is only one of the potential adverse and serious side effects of this and many other weight loss pills. Other effects may include hepatitis, adrenal burnout as well as other health concerns.

According to the preliminary studies of Alli, patients lost a whopping 1 pound per month on average. Is one pound a month worth the risk of damaging your liver?

While the FDA has looked into Alli's potential link to liver damage at an April 2009 reunion of its Drug Safety Oversight Board (DSB), a major concern involving the FDA is the fact that the organization is not issuing any warnings for those individuals currently taking the over the counter drug.

If this drug were an organic herbal supplement, the FDA would be quick to pull it from the shelves while putting the manufacturer under investigation and probably throwing them in jail. But, because this is a big pharmaceutical company designed to slowly make us ill and keep us in the system until we die, they allow this harmful drug to be sold over-the-counter even though it was investigated for causing liver damage.

Alli is also being actively marketed as we speak. Moreover, the majority of diet pills sold over the counter in the United States do not need pre-approval by the FDA, as they are not typified as drugs, but are considered food!

Currently, the FDA considers diet pills safe until found otherwise. It is not up to companies who sell these drugs to verify safety, but is the job of the FDA. Usually, due to budgetary restraints, the FDA will wait for "adverse results" to appear in those taking the drug, before any disciplinary measures take place. The FDA also has not reported how many liver-damage reports from real human beings taking the drug Alli actually exist.

We should be aware that liver damage is a highly serious condition involving liver inflammation, necrosis (a form of hepatitis), vascular lesions, and even possible liver failure. The drug companies themselves even list liver injury as a possible side effect. But why has the FDA not generated reports on this liver damage?

It may be related to the fact that, last year alone, Alli generated over $130 million dollars in sales during its first year on the diet-pill market. And GlaxoSmithKlineBeecham (the maker of Alli) is a pharmaceutical giant who spends millions lobbying for their drug approvals.

How to Safely Lose Weight

Losing weight requires a firm commitment to eating healthy, organic food on a daily basis. It also involves important lifestyle changes such as following a frequent exercise routine and reducing the stress in your life, as well as a commitment to these processes over time. This is the only true way towards sustainable weight loss, without any of the risky potential side effects such as those discussed in this article.

The bottom line is that we must take health into our own hands. We should not wait for the FDA to come to conclusions before people should stop taking this drug.

As always, natural supplements that aid weight loss are the best support when they are combined with sustained healthy diet and lifestyle choices.