Beta-Glucanase represents a group of carbohydrate enzymes which break down glycosidic bonds within beta-glucan. These glucans also create up to 60% of the cell wall of many forms of fungal organisms such as Candida albicans and candidal biofilm (the common experience of candida in the gut).

Beta glucans are a polysaccharide made of glucose molecules linked together into long chains that humans cannot readily digest. In more familiar terms they are cellulose plant fiber, cereal bran fiber, and parts of certain types of fungi, yeast, and bacteria. As a kind of indigestible fiber, they may become viscous in the intestinal tract and slow peristalsis (intestinal contractions).

Beta-glucans are health-promoting in that they act as intestinal fiber, which may help reduce high serum cholesterol levels and help create regularity through bulk formation. Water-soluble fibers may also help to regulate blood sugar and reduce the likelihood of developing colon related diseases.

Due to these important benefits, it is important to include foods with beta-glucans in the diet, but it is equally important to have enough of the beta-glucanase enzyme. Why? Because Beta glucanase hydrolyzes these glucans, reducing viscosity, and helping to revitalize natural peristalsis. This enhances the digestive process, increasing the overall nutritional value of your food.

In addition, the common effects of indigestion, bloating, abdominal discomfort and gas are greatly alleviated. You may also find your need for antacids will decrease substantially. Most importantly, in regard to beta glucanase, you will be able to better digest heavy cereal grains such as wheat, barley and rye.

The Health Benefits of Beta Glucanase

People suffering from an overgrowth of the candida fungus (a condition also known as candidiasis) may benefit from taking beta-glucanase. Although it is a fungus or yeast infection, it is notoriously difficult to eliminate because of its inherent ability to resist antimicrobial agents. Sadly, many people treat digestive concerns and infections with prolonged and high-dose antibiotics.

This can actually increase Candida’s ability to become even more antibiotic-resistant. Beta-glucanase is an enzyme that has been found to be particularly useful in reducing the coating or biofilm of Candida that can grow in the digestive tract.

When an overabundance of beta-glucan is secreted by gut bacteria or candidal cells, there is a build up of biofilms within the organism. Science is currently looking into the link between these biofilms, the overgrowth of fungal organisms, as well as increased fungal resistance to drug therapy. The build up of excess beta-glucans has also been linked to increased antibiotic resistance.

In-vitro and In-vivo studies on Candida biofilms show that when we have more beta-glucanase in the system, the Candida becomes significantly more susceptible to fungal cleansing agents. Perhaps more important, research has also shown that just supplementing with beta-glucanase alone reduces Candida biofilm in the gut. These preliminary scientific findings suggest that beta-glucanase may help reduce some of the challenging symptoms associated with having excess Candida in the intestinal tract.

A great number of studies on enzymes have been conducted in Europe and Russia on actual human participants. The great majority suggests that a broad-spectrum enzyme preparation containing beta-glucanse can improve overall digestion and reduce a large amount of negative gastrointestinal issues. One fascinating, as yet unpublished trial done by a commercial enzyme manufacturer looked into the use of a beta glucanase-containing multi-enzyme preparation and its effects on carbohydrate and protein digestive capacities.

The scientists created a gastrointestinal model for human digestion, including both the stomach and small intestinal tract, in an effort to quantitatively measure enzyme efficiency and effects. It was found that the meals taken with digestive enzymes, in optimal digestive conditions, significantly improved carbohydrate digestion and had a small improvement on protein digestion. Similarly, under conditions of less-than-optimal digestion, the multi-enzyme preparation greatly improved both carbohydrate and protein digestion.

How to Read the Units of Measurement for Beta Glucanase

BGU (Beta Glucanase Unit) is an FCC measurement based on 15-min hydrolysis of lichenin substrate at 40°C and pH 6.5. This offers an increase in reducing power due to liberated reducing groups measured by the neocuproine method. The FCC notation stands for Foods Chemical Codex, and is a division of USP (United States Pharmacopeia). It sets standards for ingredients. In the case of enzymes, FCC is a standard assay used to accurately determine the activity of enzymes. The current compendium is FCC VI.

Where Can I Find The Best Source of Beta-Glucanase? 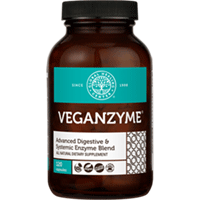 The product VeganZyme® contains a 100% vegan form of Beta-Glucanase produced by the natural fermentation process of Trichoderma reesei. It comes from all vegetarian, non-GMO sources, is kosher certified, gluten free, made in the USA from globally sourced ingredients, contains no animal products, and is great for vegetarians and vegans.

VeganZyme is the most advanced full-spectrum systemic and digestive enzyme formula in the world and is free from fillers and toxic compounds. This formula contains digestive enzymes, which help digest fats (lipids), sugars, proteins, carbohydrates, gluten, fruits and vegetables, cereals, legumes, bran, nuts and seeds, soy, dairy and all other food sources.