Benefits
Side Effects
Tips for Growing
Recipe
Other Sources 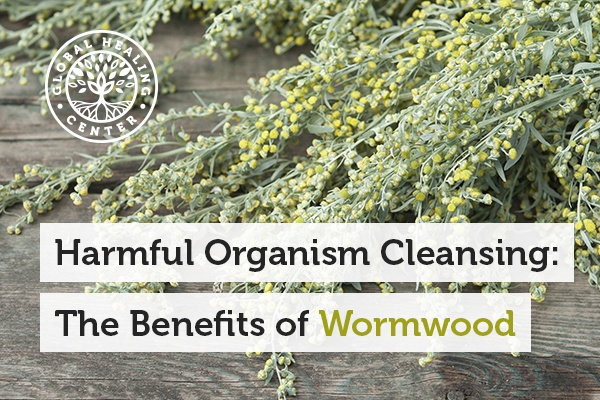 Wormwood (Artemisia absinthium) is a bitter herb found in Eurasia, North Africa, and North America. The plant has been used therapeutically since ancient times. In fact, the name "wormwood" comes from its traditional use as a means to cleanse the body of harmful organisms.

You may have heard wormwood mentioned in conjunction with absinthe, the green, highly alcoholic drink made popular during the 19th century and associated with famous (and often troubled) writers and artists like Vincent Van Gogh, Ernest Hemingway, Oscar Wilde, and Edgar Allan Poe. Habitual abuse of the drink was thought to cause absinthism, a much-hyped condition identified by hallucinations, sleeplessness, and other mental issues.

Thujone, one of the compounds found in wormwood, was believed to be responsible for these negative effects, but modern scientific methods have called this idea into question. Traditionally-produced absinthe may have an alcohol content up to 80% (160 proof!), and the production standards of the 19th century were notoriously lax. It's more likely that absinthism was simply a fancy name for the effects of alcoholism combined with toxins from impure production methods.[1]

After nearly a century, the prohibition of the drink was repealed and absinthe is enjoying a comeback. Absinthe is the most notorious use of wormwood in alcoholic beverages, but it's not the only one. Wormwood is also used as a flavoring in vermouth and bitters.

Although I don't recommend consuming wormwood in the form of 160 proof alcohol, wormwood is a therapeutic herb and its use extends as far back as the early Roman era. Traditional Asian and European medicine use wormwood and its extracts for a variety of purposes, including ridding the body of harmful organisms.[2, 3]

Harmful organisms are not only a concern for humans, but they also affect livestock, too. And, the cost of pharmaceutical drugs that target harmful organisms is high. Wormwood may offer potential as studies suggest that wormwood extract may be a natural way to eliminate intestinal invaders in some types of livestock.[8]

The benefits of wormwood are not limited to its effects on harmful organisms. Wormwood also contains compounds known to stimulate digestion by supporting liver and gallbladder function. The benefit is magnified when combined with other digestive herbs such as peppermint or ginger. Wormwood also supports healthy circulation and soothes irritation.[9] Research also suggests that wormwood may even have neuroprotective properties.[10]

Like many other plants, wormwood is a concentrated source of antioxidants. The antioxidant activity of wormwood supports its traditional use in Europe, which includes wound healing.[11, 12] Animal studies have even observed wormwood's antioxidant action revitalize enzyme activity that had been decreased by lead exposure.[13]

The Yale University School of Medicine performed a study in which patients with digestive ailments were given either a placebo or an herbal blend containing wormwood for a ten-week period. This double-blind, placebo-controlled study observed that the patients who took the herbal blend reported improved mood and quality of life.[14]

Wormwood Side Effects and Precautions

While the notion of wormwood-induced absinthism has been discredited, the possibility remains that thujone, or some other compound within wormwood, could have potentially toxic effects. However, this is only true if consumed in absurdly high quantities, or if it interacts with medications or a preexisting condition. In general, wormwood is safe for most people. But, as a precaution, women who are pregnant or breastfeeding should avoid wormwood. And, due to its potency, don't take the essential oil of wormwood internally.

Fresh wormwood can be hard to find in stores, but you can easily grow your own. Growing your own has the bonus of allowing you to control the quality of the herb. Wormwood grows well, even in less-than-ideal conditions. It grows best in U.S. Department of Agriculture plant hardiness zones 4 to 9, which means that it can be grown almost anywhere in the United States. Once established, the herb requires minimal maintenance.

Wormwood grows from either seeds or seedlings. If started from seeds, plant indoors first and transfer outside after sprouting. Plant seedlings after the last frost in spring in full sun. Wormwood prefers dry soil. Water occasionally, but don't overdo it. Wormwood is not typically vulnerable to disease, but overwatering can lead to root rot.

Harvest wormwood in July or August on a dry day after the sun has evaporated all the moisture on the plant. To harvest, remove the upper green portion, leaving behind any lower stem parts and all insect-eaten, discolored, or damaged leaves.

I shouldn't need to say that absinthe is not the best way to incorporate wormwood into your diet. Its staggeringly high alcohol content more than cancels out any possible benefit of the herb. So, with the green fairy off the table, what's the best way to consume wormwood?

A simple tea is a common and effective way to take advantage of this herb. Wormwood is extremely bitter, so you'll probably drink this for its therapeutic properties, not casual enjoyment.

Simply put ½ to 1 teaspoon of fresh or dried wormwood leaves in a cup of hot, but not quite boiling, water. Steep for 4 or 5 minutes and strain. Don't use more than a teaspoon per cup or let it steep for too long. Otherwise, the tea may become too bitter to drink. You can attempt to sweeten the tea with stevia or raw organic honey, but you may find it only improves the flavor a little bit. You can also blend it with other herbal teas like peppermint or anise to improve the flavor.

Here's a tip — after they cool, use the wormwood leaves as a poultice. Simply apply to wounds, rashes, or insect bites for natural relief.

Other Sources of Wormwood

If you can't find wormwood leaves or if you just can't take the taste, then supplementation is your next best option. Wormwood can be found as a standalone supplement or combined with other botanicals. One such product is Global Healing's own Paratrex®. Paratrex is a blend of all-natural ingredients, including wormwood, formulated to promote the cleansing of harmful organisms. It's a pure, natural, high-quality supplement from a company you can trust. As always, consult your trusted health care practitioner before starting a new supplement routine.