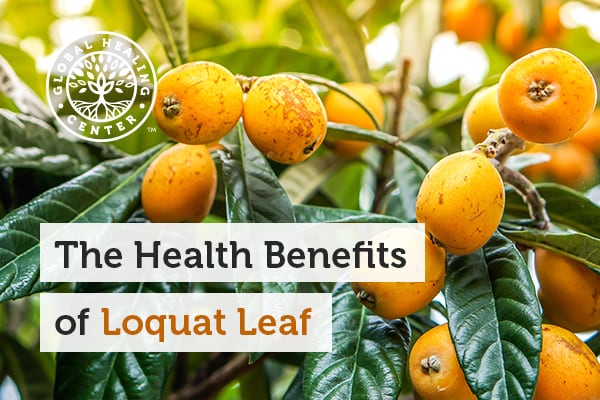 The loquat tree produces the loquat leaf and the loquat fruit, both known by their Latin name Eriobotrya japonica. It comes from the rose family and is sometimes called the Japanese plum leaf. The loquat tree is a moderately-sized tree, growing up to thirty feet. The loquat leaves are evergreen and are five to twelve inches long and three to four inches wide. These beautiful leaves are glossed and dark green. In this article, we're going to discuss the proven health benefits of the loquat, including its ability to support blood sugar and skin health. Preliminary research also reports that the loquat leaf may be helpful for supporting liver and and pancreatic health, two key organs that aid in detoxification.

What is Loquat Leaf?

Loquat leaves originate in the southeastern part of China and perhaps southern Japan, although some believe it was brought to Japan long ago by Chinese travelers. Loquat fruit is consumed by various cultures for culinary and healing purposes. The fruit resembles a cross between a mango and a peach in both taste and appearance. The leaves and fruit have high concentrations of calcium, phosphorus, iron, potassium, vitamin A, and vitamin C.

The fruit is sometimes used as a sedative and is thought to reduce vomiting and excessive thirst. Leaves may possibly relieve diarrhea, support a healthy mood, counteract intoxication, and may also reduce swelling. Some of these benefits are cited by Eastern tradition, but many of the traditional benefits have scientific backing.

Loquat leaf has been scientifically shown to possess incredible health benefits. Below are some the most common uses for this natural herb.

In our Detox Foot Pads, organic loquat leaf extract may support the body's natural detoxification process by acting as a mucolytic agent. This may help dissolve thick mucus that holds onto toxic compounds.

We now know that loquat leaf helps the body release antioxidants, the incredible health-supporting compounds that your body naturally produces. [1] Antioxidants have all kinds of benefits, but they're known mostly for their ability to neutralize harmful toxins. They are commonly used to protect the body against various diseases, support immunity, and possibly increase life expectancy.

Out of all of its benefits, one of organic loquat's most impressive ability is that it may help combat diabetes. Loquat leaf produces a variety of chemicals called triterpenes. One of the most important acids in this class of chemicals is tormentic acid. Tormentic acid has been shown to increase insulin production which may help reduce the symptoms related to diabetes. [2] It has been approved by the Chinese government as a blood-sugar supporter because it produces a set of natural bodily chemicals known as polysaccharides, compounds that have also been shown to increase insulin production. [3]

Diabetes is a debilitating, degenerative disease. The administering of insulin helps, but anything that can assist the pancreas is of primary importance. The only way to approach type II diabetes is to either give the body insulin injections or to help the pancreas produce insulin by regenerating its cells. We have strong evidence that organic loquat leaf supports pancreatic cells, which increases the production of insulin.

One of loquat leaf's oldest reported benefits is the reduction of skin redness. When loquat leaf is used in topical cream, it can combat edema and histamine-induced skin contraction. In short, loquat may help soothe the skin and provide balance for skin health. [4] Skin inflammation can often be painful and the soothing effect of loquat leaf can be very beneficial.

Another benefit of loquat leaf that's getting much exploration is its role in skin cancer. One of the major drugs that is used to combat the side effects of chemotherapy is adriamycin, and loquat leaf is thought to help reduce the side effects associated with this drug.

Standard viruses are subject to the power of the loquat leaf. Evidence suggests that the loquat leaf produces a variety of acids that have an antiviral effect. These acids produce antigens, which are antiviral agents. Two of these chemicals are called megastigmane glycosides and polyphenolic constituents, both of which are known to produce viral antigens. Furthermore, the triterpene chemicals may help reduce rhinovirus, or the common cold. [5]

The pancreas isn't the only bodily organ that organic loquat leaf helps. It also helps the liver. Loquat leaf contains a substance known as Amygdalin (B-17), and this substance is known to help combat liver disorders as well as supporting the liver's ability to process and eliminate poisons in the body. [6] It is somewhat controversial as to how effective amygdalin is in the support of liver concerns, but many believe that the controversy is due largely to excessively Western modes of thinking about health. Amygdalin, incidentally, is thought to have its benefits through antioxidation effects.

Why Loquat Leaf is Included in our Detox Foot Pads

Organic loquat leaf has many benefits, as you can tell from the above extensive (but not exhaustive) list. When packed into our Detox Foot Pads, loquat leaf may aid your body in the elimination of toxic chemicals and organisms while producing health-giving benefits.