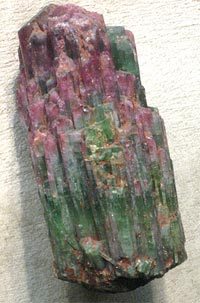 Tourmaline gemstone is a semi-precious mineral similar to granite. With colors ranging from magenta to teal-blue, meadow-green to vibrant yellow, and even black, tourmaline gets its name from the Singhalese phrase "tura mali," which means, "stone mixed with vibrant colors." It's believed that no two tourmaline stones have the exact same color and it's historically revered as a "magic" stone that is capable of protecting whoever wore it. Although it might be a stretch to say tourmaline has supernatural powers, it does have the uncommon and very special ability to generate an electric charge and emit negative ions and far infrared rays. [1]

What are Far Infrared Rays?

Far infrared rays are invisible waves of energy. They're able to penetrate all layers of the human body and reach the inner-most regions of tissues, muscles and bone. Through this, far infrared rays and negative ions gently soothe, stimulate and detoxify the body and mind. Negative ions are also incredibly important in determining mood. Michael Terman, PhD, of Columbia University in New York, has researched negative ions and reports, "The action of the pounding surf creates negative air ions and we also see it immediately after spring thunderstorms when people report lightened moods." [2] Additional research has shown that mood disorders may be improved just as well through negative ion generators as antidepressants – but without the negative side effects. Why? Because these ions promote oxygenation to the brain and regeneration of the blood.[3]

The Health Benefits of Tourmaline Gemstone

Make no mistake, tourmaline is a powerful ally when your body is in need of detoxification. The far infrared rays created by tourmaline actually produce the same resonance in the body that is normally found in water. This form of resonance absorption helps relieve stress, increase alertness, stimulate circulation, and boost the immune system. Here are just a few of the powerful effects from tourmaline.

Many professional athletes have reported great performance improvements after using therapeutic gemstones like tourmaline. Olympic swimming champion, Glen Christiansen, reportedly stated that, "The green tourmaline necklace gives me a lot of strength, and allows me to recover faster from hard workouts." She also added, "Curiously enough, it gives me more sexual interest and power." This isn't the first time it's been suggested that tourmaline may have affect sexual response. Tourmaline, which favorably influences circulation, has been reported to boost vitality and vigor in both men and women. [6] [7]