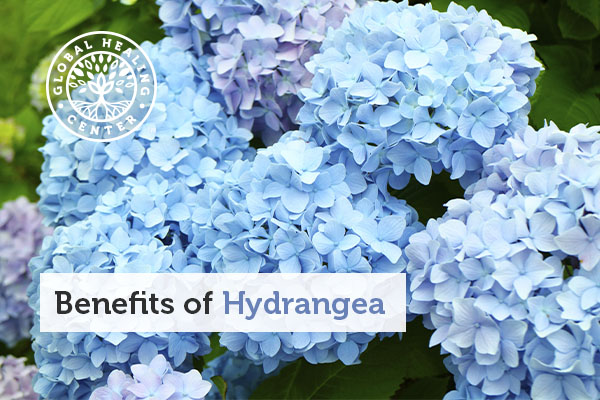 The hydrangea plant is an herbaceous, perennial shrub recognized by its beautiful white, snowball-shaped blooms. A popular ornamental, botanical, and horticultural plant, there are over twenty varieties of hydrangea worldwide. The most popular variety, Macrophylla, is a bluish-bloomed flowering plant found in the United States and Asia and appreciated for its aesthetic and health-promoting qualities.

There are four to five varieties predominant to North America, with the Arborescens being the most coveted for its therapeutic properties. "Smooth hydrangea" and "seven bark" are two commonly-associated names for this hydrangea variety. Found in damp conditions along the East Coast, this wild hydrangea has been used for years as a healing remedy for many health issues. It was an esteemed herbal remedy among the Cherokee Native Americans as well as settlers in the colonial era for kidney stones. [1]

The Benefits of Hydrangea

Hydrangea is a lithotrophic, diuretic, and tonic herb. Lithotrophic herbs are known for their action against stones. As a diuretic, hydrangea may help increase urine flow. It is believed by many traditional healers that hydrangea supports kidney function by helping waste removal and hormone secretion.

Hydrangin, a naturally-occurring phytochemical solvent in hydrangea, has long been theorized as being the primary constituent that makes the plant effective against kidney stones. Other therapeutic phytochemicals in hydrangea include flavonoids such as kaempferol and quercetin. [2] A mineral-rich plant, hydrangea contains calcium, magnesium, phosphorous, and sulfur and its minerals are believed to contribute to a vital state of health.

Many people consume the herb for therapeutic benefit by steeping the root and rhizomes in boiling water for three to five minutes and straining the mixture to make a tea. Many teas and tinctures containing hydrangea include other herbal extracts that also promote kidney health, such as gravel root, dandelion, uva ursi, and chanca piedra.