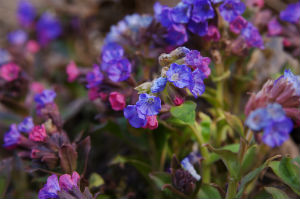 Lungwort, also known as lungwort leaf or Pulmonaria officinalis, is a natural plant that has been used around the world for a variety of respiratory ailments, including coughs, colds, bronchial detoxification and catarrhal concerns. Lungwort is found in native damp habitats and coastal areas in Europe, Asia, North America, and Africa. [1] Because it’s very sensitive to environmental toxins, the areas in which it is found are typically unpolluted old forests, and thus, the presence of lungwort is often a good indicator of an ecosystem's health.

A Brief History of Lungwort

In the early 1600s, a theory known as the “Doctrine of Signatures” was widely accepted. Essentially the foundation of this practice was that plants resembling certain human physical attributes were believed to be beneficial to the part of the body they resembled. It was during this time that lungwort – which resembles the tissue inside the lungs – was discovered to be an effective remedy for respiratory ailments.

Over time, the medical accuracy of many “Doctrine of Signatures” based remedies was discredited. However, modern research suggests lungwort has certain traits, specifically as an antioxidant and secretolytic that may be beneficial to lung health.

The University of North Carolina classifies lungwort as a plant helpful for reducing irritation and providing soothing qualities. [2] It is believed that these beneficial properties, based mainly on overwhelming anecdotal support, is deemed as a respiratory aid.

Lungwort's high mucilage content is known to be helpful in respiratory conditions, namely asthma and, in particular, chronic bronchitis. [3] While there isn't a ton of research currently available, it is widely accepted that lungwort can be used by people with these conditions – in conjunction with doctor recommendations – as a complementary approach.

Lungwort’s role as an effective respiratory therapy is also due in part to its antioxidative properties. A Bulgarian study confirms these findings, noting high phenolic content and antioxidant properties in teas made from the plant. [4]

It's already well established that antioxidants serve vital roles in the human body, from protecting the cardiovascular system to supporting healthy aging. Antioxidants are crucial for supporting organ health and wellbeing, especially in the presence of pro-oxidants, or free radicals. That being said, it is believed that lungwort is effective against harmful organisms that affect lung and chest function due to its high level of flavonoid glycosides, another name for specific types of antioxidants. [5]

Lungwort is most often available in tinctures, teas, and capsule form. Short term or infrequent use of lungwort is generally considered safe. For supporting health on all levels, I recommend lungwort in its pure, natural form. Lungwort is one of the many high-quality, plant-based ingredients available in Allertrex®, an important natural tool designed to support lung and respiratory health.