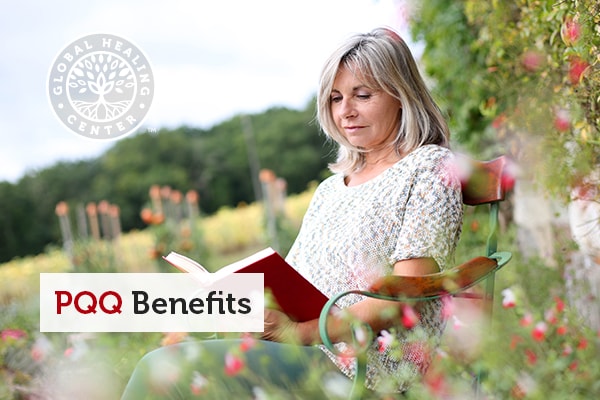 Tiny organs inside your cells — mitochondria — work hard every day, turning the food you consume into energy. But with age, the number of mitochondria naturally declines.[1] A molecule found in your body called pyrroloquinoline quinone, or PQQ for short, has many benefits for your health, most notably boosting the production of mitochondria.

Referred to as an all-natural "fountain of youth," PQQ's ability to power up your mitochondria does a lot for your health and longevity.

When you have more mitochondria, it impacts your energy level, metabolism, and resilience to disease. PQQ also protects against oxidative stress with its super-antioxidant power — and may keep you feeling young for many years to come.

Scientists first discovered pyrroloquinoline quinone (PQQ) as a "coenzyme" in biochemical reactions in bacteria. But in the late 1990s, scientists found that PQQ plays a role in mammalian biochemistry, as well.

Scientists have found PQQ in interstellar dust, which means it's as ancient as the stars — living organisms have been exposed to it and have likely used it in their bodies since the beginning of time.

PQQ is a unique nutrient that is essential for growth and development.[1] It acts as an antioxidant within your cells, counteracting free radical damage. PQQ also helps your cells communicate.

Did you know that PQQ helps your body make new mitochondria?

Most importantly, PQQ stimulates "mitochondrial biogenesis" — the making of new mitochondria.[2] Until recently, scientists only thought that strict caloric restriction, exercise, and certain medications could do that. This is big news!

As you get older, your mitochondria become worn down, causing your cells to age more rapidly. This deterioration can lead to age-related diseases.[3] Researchers have discovered that individuals over the age of 70 have 15 times more mitochondrial damage than individuals in their 40s.[4]

PQQ can positively impact your health in numerous ways.[5] Let's explore how.

Mitochondria are the "energy production plants" in your cells. Virtually all of the energy used to keep your body functioning comes from these tiny microscopic organelles. As you get older, the number of healthy mitochondria within the body declines.

It may take only 3 days to boost mitochondrial function using PQQ!

Not too long ago, scientists widely believed that damaged neurons (nerve cells) could not repair themselves. Eventually, researchers discovered nerve growth factor (NGF) — a small protein that protects existing neurons and encourages new ones to grow.

In one preliminary study, PQQ protected brain cells against damage when exposed to toxins.[8] In other words, PQQ may be "neuroprotective" which means it helps protect healthy brain cells.

Did you know that free radicals can impact your attention span and learning skills?

As we age, our brains are more susceptible to damage caused by harmful free radicals in the environment. This can impact attention span, the ability to learn, and memory.

If you are first exposed to some type of oxidative stress (usually caused by free radical damage), and later take PQQ, it may improve memory and reduce the harm caused to cells.[7]

If you find yourself growing more forgetful, PQQ might help. When a group of older adults took a PQQ supplement each day for 12 weeks, the results were promising. Participants reported improvements both in focus and in their ability to remember.[9] 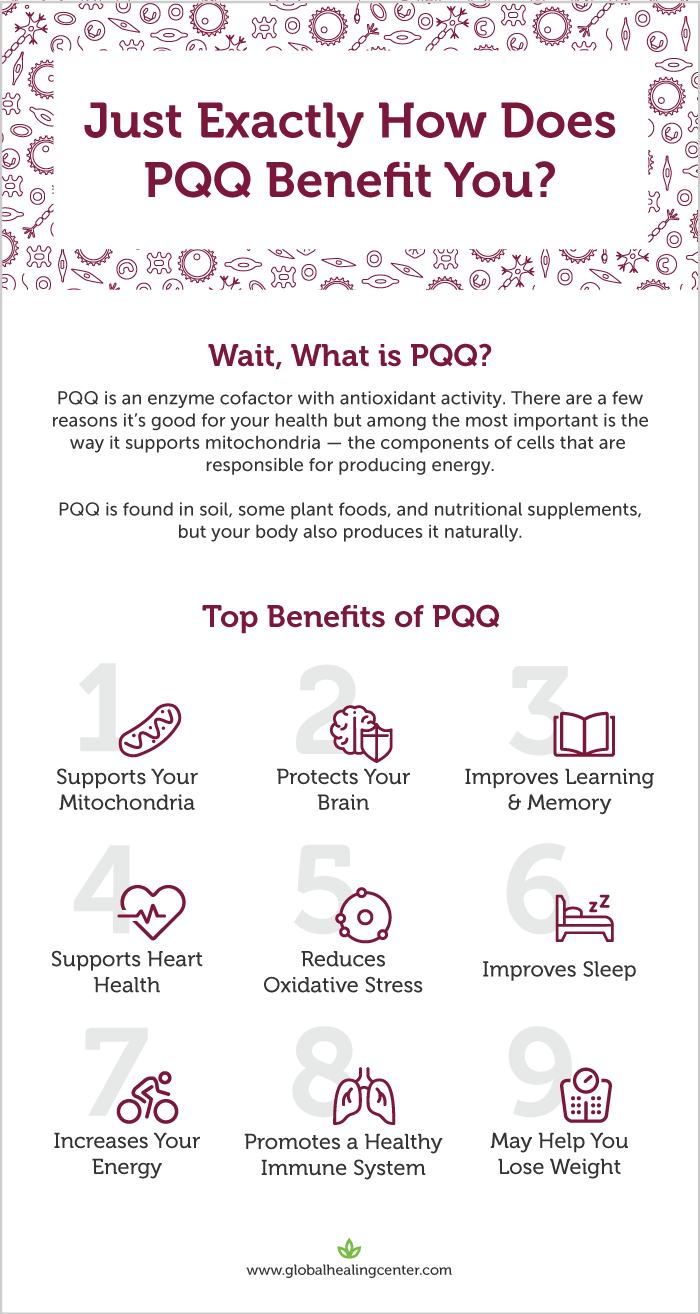 Your heart contains more mitochondria than any other organ in the body. This is because your heart pumps 24/7 and requires a lot of energy to keep it running properly.

Recent research into the role that mitochondria play in heart health has given a glimpse into new, potential strategies for maintaining a healthy heart while aging.[11] Because PQQ supports mitochondrial health and function, it is known as a cardioprotective nutrient.

Oxidative stress is an imbalance between harmful free radicals that enter the body from the environment and the antioxidants that work to eliminate them. In older adults, oxidative stress can lead to poor health, chronic swelling in the body, and frailty.[12]

PQQ is an antioxidant that can enhance the body's resistance to oxidative stress.[13] This is promising news — by reducing oxidative stress in the body, PQQ may give you the opportunity to live a longer, healthier life — aging gracefully.

Sick of counting sheep? If you struggle with falling and staying asleep, PQQ could bring more restful nights.

Individuals who experienced daytime fatigue and sleep troubles were given PQQ supplements for eight weeks. They reported significant improvements to their sleep in the areas of sleep duration, the amount of time it took to fall asleep, and how alert they felt in the mornings.[14]

As we continue to explore exactly how PQQ improves sleep, researchers believe it promotes normal levels of cortisol, the stress hormone, in the body, improving sleep quality and leading to happier moods.[14]

It takes a lot of energy to get through our busy days in this modern world. Most of us require a full night of restful sleep each night to feel well-rested and energized. People taking PQQ over eight weeks reported significant improvements to their energy levels.[14]

But catching more ZZZs isn't the only reason why PQQ may improve energy. Since mitochondria produce energy for cells and PQQ stimulates the production of mitochondria, you may also see an overall boost of energy during the day.[2, 6]

You've likely heard that vitamin C is good for the immune system when you're feeling under the weather. Remarkably, PQQ has 100 times more antioxidant power than vitamin C, giving a much-desired boost to the immune system.[15]

PQQ's antioxidant capacity is remarkable! It has 100 times more power than vitamin C.

Depriving organisms of PQQ causes growth impairment and compromises immune systems.[16] As mentioned above, taking PQQ supplements counteracts free radical damage, which is the essence of what an antioxidant does.[15]

May Help You Lose Weight

Eating a nutrient-dense, plant-based diet and getting regular exercise are the two best ways to lose extra weight.

However, some foods and supplements can give your metabolism a kick. PQQ may help support your weight loss efforts by stimulating the body to produce more mitochondria, which boosts metabolism. Eating a PQQ-deficient diet can lead to fewer mitochondria, and a slower metabolism.[6]

You can find PQQ in most plant-based foods, but some have higher concentrations of this essential micronutrient. PQQ-rich foods include:[18]

Consuming PQQ in foods is safe with no known negative side effects.[19] It has likely been a part of our biochemistry since life began.[20]

Side effects from short-term PQQ supplementation are rare and unlikely to occur unless consumed in extremely high doses.[19]

If you are taking a PQQ supplement, it is important to follow the recommended daily quantity to take.

PQQ and CoQ10 are effective alone but may be stronger together. Ubiquinone — otherwise known as CoQ10 — is a vitamin-like substance the body uses to convert fats and sugars into cellular energy. Like PQQ, CoQ10 is an antioxidant that supports mitochondrial health. I recommend Global Healing’s CoQ10 & BioPQQ® with Shilajit — a synergistic blend of antioxidants that protect your mitochondria — tiny energy-producers inside your cells.

When paired together, these molecules promoted healthy cognitive function even better than each alone.[21, 22] People who took PQQ and CoQ10 together performed better on visual and verbal memory tests than either supplement alone. It appears that this combination may boost memory and attention span.

PQQ has a positive impact on your health and well-being because it appears to promote the production of new mitochondria in the body. Your body requires healthy mitochondria for optimal health — this is particularly important with age. Also, thanks to its antioxidant properties, PQQ does battle with free radicals in your body, promoting better health.

The health benefits of this powerful "fountain of youth" molecule are plentiful: PQQ can promote healthy memory and focus, help you get better sleep and feel more energized, and boost your immune system to help you stay healthy. Not only that, but PQQ may help you maintain a healthy weight and support heart health.

Do you use PQQ? How has it impacted you? Comment below!