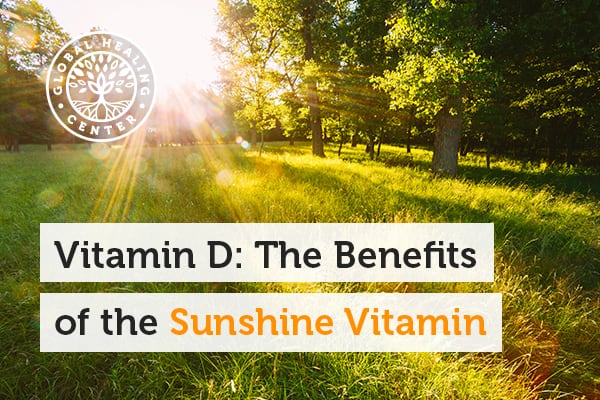 There are five different types of Vitamin D (D1, D2, D3, D4 & D5), but D2 and D3 are the only types that our bodies can use. When something just says "vitamin D" it is generally referring to D2 or D3 (or a combination of the two). Vitamin D is a pro-hormone, which is the precursor to a hormone. In its raw form (sun exposure, foods, supplements), Vitamin D is inert and has to go through a series of complex biochemical reactions before your body can use it. These reactions produce calcitriol, which is the form of Vitamin D that is used by your body (D2 and D3). Vitamin D is one of the only vitamins that your body can produce by itself. What is the catalyst that gets your D production going? Good old-fashioned sunshine! It's the ultraviolet-B radiation (UVB) that enables vitamin D production to occur in the skin. Vitamin D is produced in equal amounts in both people with fairly pigmented and darkly pigmented skin after exposure to UVB radiation (sunlight) [1]. Sunlight is important for Vitamin D production, but the strength of sunlight and the intensity of UVB exposure can be affected by season, distance from the equator, and even personal habits. If you have a job that keeps you indoors during daylight hours, or you work nights, you don't produce as much Vitamin D as someone who is outside for at least ten to fifteen minutes each day.

Vitamin D can be supplemented by eating the right foods. See my previous blog post about foods containing Vitamin D.

Vitamin D supports bone development by enabling calcium uptake by your body. It is also important for healthy immune system function[2] and may help lower your risk of contracting colds [3]. Vitamin D also helps confer innate immunity which may protect your body from the influenza virus [4]. Vitamin D has had a positive effect on many different diseases, including multiple sclerosis [5], arthritis [6] and even cancer [7]. Children with higher vitamin D levels are less likely to suffer from asthma [8] and allergies than those who are vitamin D deficient. Mental agility might be maintained by adequate levels of the vitamin, especially in the elderly [9]. Because Vitamin D promotes calcium absorption, it is important for bone mineralization (hardening), which keeps your bones strong and supple. A sufficient amount of Vitamin D helps prevent joint discomfort.

There is also evidence suggesting that Vitamin D may play an important role in weight loss [10], both in adults and in children. Some researchers are exploring whether vitamin D may act as a natural protector from low levels of radiation [11], such as the background radiation we receive from sunlight and other sources.

There are no clearly defined causes of vitamin D deficiency. However, the obvious culprits are not eating right and a lack of activity in general, but especially outdoor activity. Adults and children who have poor diets are especially at risk. Risk factors for being vitamin D deficient include race, gender, and lifestyle, including time spent watching TV, playing video games or sitting in front of the computer.

People at high risk of having Vitamin D Deficiency Syndrome (VDDS) are often those who suffer from other disorders, such as autoimmune diseases, heart disease, osteoporosis, chronic pain and fatigue, and certain cancers. Symptoms of some of these disorders can be lessened by taking a Vitamin D supplement or eating more foods with vitamin d. Other diseases and disorders, such as rickets, rheumatism, and osteoporosis (bone disease) can be exacerbated by a lack of vitamin D in the body [12]. Hypocalcemic tetany, a condition in which the body is low in calcium due to vitamin D deficiency, causes overactive neurological reflexes, spasms of the extremities (hands and feet) and larynx, and muscle cramps. Calcitriol, the form of vitamin D your body uses, plays a key role in the maintenance of many organ systems.