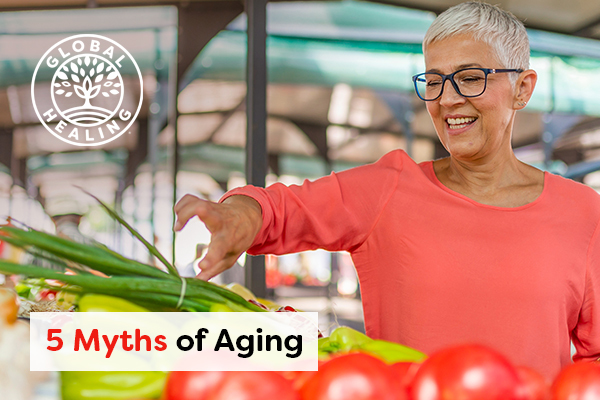 It's probably fair to say that most people aren't excited about the prospect of aging and dealing with the health concerns that accompany getting old. While it's true that each passing year is an opportunity for a new challenge, aging also gets a lot of bad press — some of which is exaggerated and overblown.

Let's dispel five of the most common myths about aging.

The notion that the elderly are unable to think for themselves and constantly forgetting the most mundane things is an offensive and unfair caricature. In reality, cognitive decline affects about five percent of Americans. With a little prudence, a lot of age-related decline in mental function can be avoided.

Scientists from Tufts University discovered that vitamin deficiencies — not brain decay — are responsible for many of the symptoms of cognitive decline. They reported that low folate levels in the elderly could cause forgetfulness and even depression. The unsettling thing about nutrient deficiencies is that they're often overlooked. In fact, an older individual can be lacking in certain vitamins for years without dramatic signs of a deficiency. How many people are being affected slowly as a result of a very fixable nutrient deficiency?[1]

2. I Don't Have to Change My Eating Habits

Perhaps one of the biggest myths about maintaining good health is that nutritional requirements remain constant throughout life. It is true that a good, sound diet with plenty of raw fruits and vegetables is ideal. Still, it's estimated that up to 40 percent of independent elderly are deficient in a wide range of nutrients for various reasons. Chronic illness, both mental and physical, contributes to nutritional deficiencies. Some medications impair nutrient bioavailability or contribute to appetite loss. Even ill-fitting dentures can be painful enough to prevent a person from eating. Elderly who live alone can forget to eat due to a lack of social cues.

But, even if you stay relatively healthy in old age, aging itself generally affects metabolism and physiology. Stomach acid usually declines, thus affecting nutrient absorption — especially vitamin B12. Aging also dampens appetite, and it's suspected that an older palate doesn't detect the sweet and salty flavors that bring us to the dinner table.[2]

Dental health concerns frequently increase with age. Periodontitis, also known as gum disease, is the primary cause of tooth loss in older adults. It typically starts as gingivitis, which affects many people, regardless of age. A New England Elders Dental Study even cited periodontal disease rates as high as 75 percent. The issue, however, isn't an unavoidable decline in oral health, but rather that education and dental care are being overlooked.[3]

Proper dental hygiene and regular cleanings are usually enough to stave off this concern. Brush your teeth, and don't hang on to your toothbrush like it's a family heirloom. You should replace your toothbrush every two weeks. If you have extra concerns, then replace it more often.[4]

And don't forget that a healthy immune system is also important for oral health. A Midwestern research group found that cigarette smoking decreases immunity and sabotages periodontitis treatment.[5] Poor eating habits, stress, and other immunosuppressants are just as damaging.

4. The Effects of Aging Can't Be Managed Through Lifestyle Changes

If you've used the excuse that you can no longer change the way you live your life because of your age, then it's time to let go of that old belief. Eliminating two of the most challenging health habits to break — smoking and a sedentary lifestyle — from your life will produce amazing results. Former Surgeon General Antonia Novello said that older individuals who quit smoking could still expect to experience health and vitality.[6]

It only takes 20 minutes after quitting smoking for blood pressure, body temperature, and pulse to return to normal. Eight hours after that, blood oxygen levels rise. After a day, heart attack chances dramatically decrease. In just five years, the risk of lung cancer falls to about half. After five more years, lung cancer risk almost parallels that of a non-smoker.[7] These changes occur regardless of age.

A regular exercise routine decreases the risk of chronic disease later in life, and it may also prevent early death. Those who begin exercising later in life can slow or even reverse organ deterioration. On top of that, when the elderly exercise, their heart is stronger, muscles are more fit and flexible, mood is enhanced, and falls and fractures are less frequent. The bottom line is that exercise can improve your quality of life significantly.[8]

Old age doesn't have to mean feeling sick and tired. An important part of staying well into the older years is keeping your immune system running smoothly.

Aging is generally associated with suppressed immunity and, consequently, more infections of the respiratory tract. One study, however, found that when an independent and healthy elderly person was fed nutritional supplements for a year, their immunity improved.[9] Those individuals who supplemented had far fewer infections and took less frequent doses of antibiotics. These effects were achieved with just a moderate amount of nutrients.

You can avoid many age-related diseases with specific, yet simple health precautions. There is evidence that smoking and low levels of vitamins C, E, and beta-carotene cause cataracts.[10] Dr. Dean Ornish showed that a one-year program of stress management, moderate exercise, smoking cessation, and a low-fat vegetarian diet might reverse coronary atherosclerosis.[11] In addition, supplementing with calcium and magnesium can support cardiovascular health for some people. Keeping blood pressure under control decreases the risk of a stroke.

Adult-onset diabetes is common and might be best addressed through diet, specifically by reducing sugar intake, increasing fiber consumption, and taking chromium supplements.[12] As long as we're on the subject of diet, know that half of all types of cancer are linked to diet. Eating less fat and more fruits, vegetables, fiber, vitamins A, B6, C, E, zinc, and selenium all play a role in supporting the immune system.[13]

The Truth About Aging

Aging is inevitable, but poor health is not. Regular exercise, nutritious foods, and healthy habits can help you age with grace. Incorporating certain herbs and spices like turmeric into your daily routine can help override genetic tendencies and enhance your well-being throughout life.