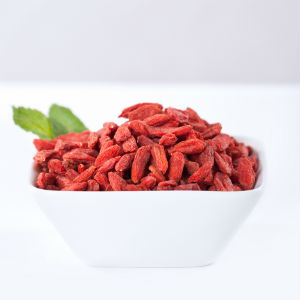 Lycium barbarum is a plant native to Asia and parts of Europe and the berries from this plant, goji berries, have been a component of traditional Chinese medicine for centuries. Thought to support vision, blood flow, and cough, these little red berries have become quite popular in the United States, even being dubbed a superfood. They are available in dried form or as a juice and can be eaten alone as a snack, added to recipes, or sprinkled onto a salad.

What makes goji berries so nutritious? Well, their high antioxidant content is often cited as their most impressive feature. That, and the other nutrients found goji berries, are responsible for a wide range of other health benefits.[1] Let's take a look at just a few.

1. Goji Berries Are Good for You

FreeLife International conducted the first 15-day double-blind, clinical trial outside of China to evaluate the general effects of consuming goji berries. The test subjects, healthy human adults, were evaluated on feelings of well-being, neurological characteristics, and overall body system complaints. When the day 1-15 data was analyzed for changes, significant increases in energy, athletic performance, sleep quality, focus, and happiness were reported by the group that consumed goji berries. They also reported a significant improvement in gastrointestinal regularity. The placebo group did not report these improvements. Researchers concluded that daily consumption of goji berries might improve overall well-being, and improve psychological performance and gastrointestinal functions.[2]

Every year we hear about the latest influenza epidemic and every year we're told it's time to get a flu shot. Wouldn't it be nice to get a protective benefit naturally? Goji berries may be the answer. Long appreciated as an exceptionally nutritious food in China and shown to improve immune response in animals and people, goji berries might help you avoid the flu. The Jean Mayer USDA Human Nutrition Research Center at Tufts University tested this hypothesis in an experiment that involved adult mice who were fed a goji berry preparation for four weeks then infected with the flu. The goji berry preparation appeared to heighten immune response, and researchers concluded that goji berry supplementation may reduce health interruptions by reducing irritation and promoting immune activity.[4]

4. Goji Berries Are Good for Your Eyes

In general, research has repeatedly shown that including berries in your diet can positively impact your health and performance. Goji berries are one of several exotic berries, including pomegranates, mangosteens, and acai, that have become very popular in recent years and rightfully so — these things are packed with healthy goodness. When selecting goji berries, always go organic and also know that wild grown berries have been shown to contain higher antioxidant levels than berries that have been cultivated.[7]