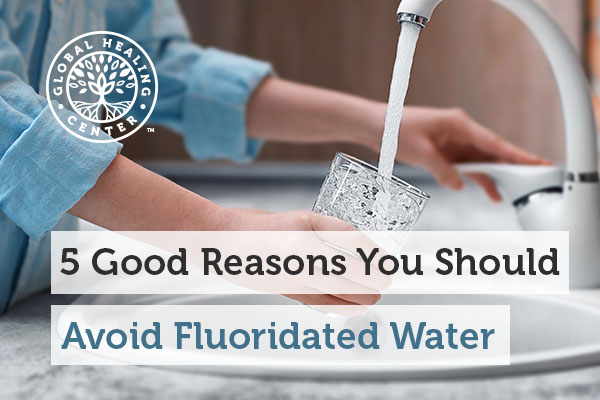 Fluoride was originally added to water supplies back around the time of the end of World War II, but this well-intended practice to improve dental health is still around today, and more and more people are recognizing the possible dangers. Certainly, a lot of people out there will tell you there’s no concern with fluoridated water, but these people are simply repeating outdated studies that are not backed by current evidence.

Why You Need to Avoid Fluoridated Water

Drinking fluoridated water may seem like a good idea, but it’s actually anything but. Not only can consuming fluoride harm the brain, it also has severe impacts on hormonal health. Here are 5 reasons to avoid it like the Plague.

1. Fluoridated Water Can Damage the Thyroid

A recent study reported water fluoridation in England is linked to a 30 percent increase in the rate of under active thyroid; still, other reports suggest 2 to 5 mg of fluoride over months can actually reduce thyroid function. [1] [2] Close to 70 percent of the U.S. water supply is fluoridated. But should we really be putting an endocrine disruptor like fluoride into the water we drink?

2. Fluoridated Water is Linked to ADHD

With a more than 50 percent increase in the past 10 years, ADHD is becoming a big concern in the U.S. [3] So what’s causing this increase? Well, if you live in a state with fluoridated water, that could even be a factor. For the first time, scientists have “found that states with a higher portion of artificially fluoridated water had a higher prevalence of ADHD,” and it seems like more than just a fluke: the trend even “held up across six different years examined.” [4]

New data suggests fluoridated water could even lead to brain damage and lower IQs in kids. [5] As a neurotoxin, fluoride could even cause damage equivalent to that from a traumatic brain injury. Some experts believe that adding fluoride to the water supply is not only reckless, it’s immoral. Unfortunately, many of the individuals in control of fluoridating water are unaware of the hazards of the toxin. [6]

4. Fluoridated Water Can Cause Fluorosis

Too much fluoride can affect teeth and bones. The World Health Organization (WHO) says ”fluoride levels above 1.5 mg per litre cause pitting of tooth enamel and deposits in bones. Levels above 10 mg per litre cause the crippling skeletal fluorosis.” [7] In the U.S., we’re often exposed to levels in the 2 to 5 mg range, but in India, fluorosis is such a concern that, in 2008, the government had to create a national health plan to combat excess fluoride in the water. With the way the U.S. loves its fluoride, why couldn’t that happen here?

Fluoride damage to bones and teeth isn’t the only issue; the toxin can also build up in very high levels in the pineal gland. [8] Located in the brain, this gland is responsible for melatonin synthesis and production. While it’s not known just how fluoride can damage the gland, one thing melatonin controls is the start of puberty in girls, and some evidence suggests the build-up could be a factor in early onset.

Avoid Fluoride at All Costs

Fluoridated water is causing all sorts of damage to our bodies — maybe even more than we know. Sure, there’s an old argument that taking the fluoride out of the water supply would significantly damage oral health; but, in the 21st century, is that still the best argument?