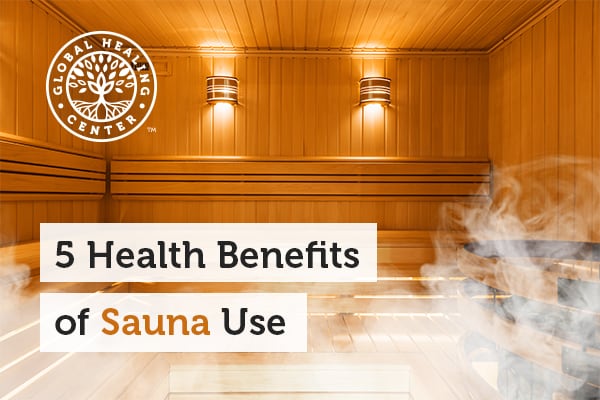 If you've ever been in a sauna, then you know first hand how rejuvenating and invigorating a good sweat can be. Sweating is a form of detoxification and there may be no better place to stimulate this process than in the sauna. Sauna therapy developed in the Scandinavian region, specifically Finland, and is used for bathing, healing ailments, and even as a setting for childbirth. To say the sauna is a foundational element of Finnish society would be an understatement, some even view it as a holy place and behave as they would in a church. It's no wonder. More than just a place to feel good, the sweat-inducing heat helps to balance many health concerns including hypertension, fatigue, discomfort, and even certain cravings.

Benefits of Using the Sauna

Many formal studies have set out to determine the health benefits of using a sauna, and the outcomes have been very positive.

The Department of Rehabilitation and Physical Medicine at Japan's Kagoshima University conducted a study comprised of 44 females who had fibromyalgia symptoms. Three days a week, the participants took part in daily sauna sessions combined with twice a week water exercise sessions. Researchers reported the combination of sauna therapy and water exercise improved the participants' quality of life and fibromyalgia symptoms.[1]

Some critics have unduly fingered the sauna as being too stressful on the heart. But, according to Finland's UKK Institute for Health Promotion Research, responsible sauna use is highly unlikely to cause any cardiac concerns.[2] In fact, research orchestrated by the Cardiovascular and Prevention Centre at Quebec's Université de Montréal found that exercise and sauna bathing provided a 24-hour window of improvement of symptoms for persons with hypertension.[3] One word of caution, however, is advised before participating in the old tradition of jumping from the sauna into the snowbank as the immediate, extreme cooling can increase the risk of cardiac arrhythmias.

A New Zealand study comprised of distance runners found that bathing increased run time to exhaustion by 32 percent. Additionally, plasma and red-cell volumes after sauna increased by 7.1 percent and 3.5 percent. Researchers concluded that increased blood volume was likely the reason why post-exercise sauna bathing produced a significant enhancement of performance.[4]

Research has repeatedly shown that sweating in a sauna can help detoxify the body of the toxic agents, such as lactic acid, sodium, and uric acid, that routinely accumulate in the body. Toxins stored in subcutaneous fat are released through perspiration. As toxins stored in the fat pass through perspiration, toxins that are stored at deeper levels of tissue throughout the body will move up and continue to be released through sweat. Circulation increases when you're in the sauna and increased blood flow improves blood oxygenation. Enhanced oxygen levels can assist in the dissolution of hidden toxic agents in the blood.[2]

According to the Southwest College of Naturopathic Medicine, sauna bathing is an effective component of purification and cleansing protocols and very effective for flushing out fat-soluble chemical and toxins.[6]

Unfortunately, law enforcement officers are often at risk for exposure to harmful substances such as methamphetamine and the toxic chemicals used to create it. This exposure can lead to chronic symptoms that may be disabling. To find new ways to combat this issue, 69 officers participated in a study conducted by the Utah Meth Cops Project. Subjects followed a multi-faceted detoxification program that included exercise, nutrition, and sauna therapy. Following the detoxification routine, significant health improvements were observed. Researchers concluded that sauna and nutritional therapy may improve some symptoms of methamphetamine-related exposure for affected officers.[7]

When Was the Last Time You Visited the Sauna?