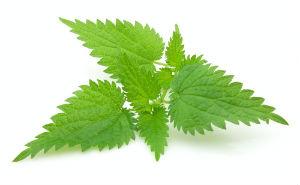 Many people know "Stinging Nettle" as an annoying garden weed that delivers a painful bite. However, nettle is far, far more than a nuisance! The nettle plant as a whole- roots, stem, and leaves, has been examined by some of the world’s leading research institutions and found to have many powerful, positive benefits to offer the human body.

What Compounds Does Nettle Contain?

The plant is comprised mainly of complex sugars and lectins. Nettle contains prostaglandins which have properties that support resistance to redness and irritation. Nettle leaf also contains high levels of protein, calcium, phosphorus, iron, magnesium, and beta-carotene and high amounts of the vitamins A, C, D, and B complex.

Nettle has been evaluated for antioxidant activity, its resistance to microorganisms, and other common, as well as serious, health ailments. The Department of Nutritional Sciences & Toxicology, University of California, Berkeley evaluated separate components of the nettle plant (roots, stalk, leaves) and discovered overall potent nutraceutical activity throughout. [1]

Università di Pisa in Italy determined further evidence of the benefits of nettle by concluding that nettle had a relaxing effect that produced a decrease in blood pressure. [2]

Relation to Defense Against Microorganisms

Research conducted at Turkey's Institute of Transplantation and Gene Sciences of Baskent University performed a study designed to evaluate harmful organism toxicity in several plant extracts, including stinging nettle. Results indicated high activity in the nettle extract and even suggested it to be an extract of importance to the agricultural industry in a plant disease control capacity. What opportunities has that opened to organic farmers? [3] This is not much surprise, nettle has repeatedly proven effective as a defense against microorganisms. A Netherlands study found significant activity against harmful organisms within nettle extract and noted it may be beneficial for some instances of diarrhea. [4]

Research conducted at Abant Izzet Baysal University in Turkey evaluated nettle against six common harmful organisms. Nettle leaf extract showed the highest inhibitory effects against three of the six organisms. [5] The Institute for Vaccines and Sera in Russia also evaluated the efficacy of herbs against microorganisms and found nettle to be effective. [6]

Germany has a cultural tradition of addressing incidences of enlarged prostate with herbal therapies. Germany's Universitätsklinik Essen formally evaluated the efficacy of nettle root extract and found the antiphlogistic and antiproliferative effects of the stinging nettle extract to provide a safe therapeutic option for enlarged prostate. [7]

Research conducted by Philipps-Universität in Germany also found significant activity when evaluating the effect of nettle root extract on enlarged prostate. [8] Furthermore, the Department of Anatomy and Cell Biology at Philipps-Universität indicated research suggests nettle root extract to hold compounds that would be of interest for those researching prostate health. [9]

Kynurenic acid is a substance that’s gotten attention recently due to exhibiting positive cognitive benefits in mice. [10] The Institute of Agricultural Medicine in Lublin, Poland evaluated various herbs for kynurenic acid. Nettle leaf was tested and KYNA was found present. KYNA has been generating interest due to proposed neuroactive activity that may be beneficial in certain neurobiological disorders. [11]