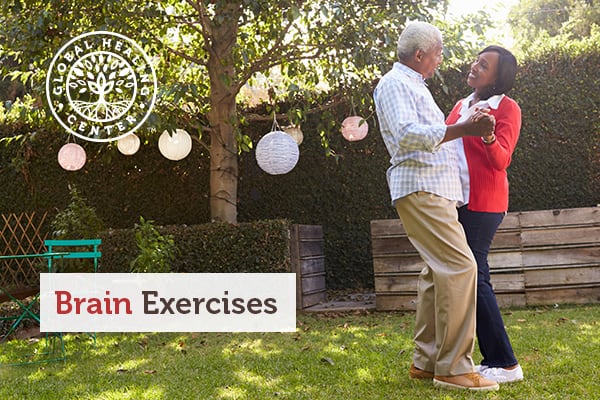 Did you know your brain can atrophy or shrink if you don’t train it regularly? When the brain atrophies, your ability to remember, think clearly, and make decisions shrinks, as well. The good news? You can strengthen your mental acuity with brain exercises! You can do these regularly, throughout life.

Just like lifting weights can sculpt your muscles, mental fitness can keep your brain operating at its peak. In a world where a new case of dementia is diagnosed every four seconds,[1] it’s never too soon to take action. Think of this as a workout for your mind.

The Top 12 Ways to Exercise Your Brain

From hitting the dance floor to putting together a jigsaw puzzle, here are 12 easy “neurobic” exercises you can try. They will improve your focus, memory, and concentration and help you live an even healthier lifestyle.

Keep your brain alive and active by dancing up a storm! Dancing helps integrate the parts of your brain that enable you to keep your balance, strategize, and keep to a rhythm. From ballroom waltzes to Latin rhythms, dancing has a greater impact on cognitive abilities than other types of physical exercise — or any kind of mental task on its own.[2]

Participants in a Latin ballroom dance program found great improvements in their focus, attention, and memory. These improvements were seen in healthy individuals as well as older adults with mild cognitive impairment.[2]

But dancing has another hidden benefit. When it occurs in a social setting, dance also wards off loneliness — which cuts down your risk for dementia.[3]

Physical activity has a profound impact on your brain health in several ways. Exercise helps the prefrontal cortex and medial temporal cortex — areas of the brain that govern your ability to plan, organize, and make decisions.

By increasing your heart rate, exercise pumps more oxygen to the brain. As a result, even brief exercise of moderate intensity improves your ability to process information and remember it later.[4]

Regular aerobic exercise increases the size of the hippocampus.[5] That’s the area of the brain involved in verbal memory and learning. Physical activity not only grows new brain cell connections but also releases hormones that provide a nourishing environment in which those cells can grow.[6] It drops your stress hormone levels, creating an antidepressant effect that also helps your hippocampus grow.[7] Now that’s a great reason to get your fitness on!

Pushing your brain out of its comfort zone helps it make new neural pathways. These connections protect you from age-related cognitive decline.

One way to do this is by choosing novel driving routes to get to your destination, rather than operating on automatic mode at the wheel. But just thinking through a driving route, you can boost your brain health!

London taxi drivers were asked to picture various routes around the city from memory. That simple mental activity helped activate the hippocampus.[8] Some people also like to draw a map out by hand. Repeat this exercise as often as you’d like.

Jigsaw puzzles are a fun way to stimulate your logical left brain while also fulfilling the needs of your creative right brain. Making connections between both sides of your brain helps enhance your ability to learn and understand.

In addition to being an excellent way to improve your hand-eye coordination and sense of spatial arrangement, jigsaw puzzles also help develop your ability to analyze, reason, and deduce answers.[9]

As you look for the correct shape and color of pieces to solve the puzzle, you train your brain’s short-term memory. The act of putting each piece in place, bringing you closer to completion, causes your brain to produce dopamine. This neurotransmitter affects motor control, memory, motivation, and concentration.[9]

5. Try Your Hand at Crossword Puzzles

Crossword puzzles are not just a fun way to alleviate boredom. They also boost your vocabulary, prevent memory loss, and boost your mental clarity.

Participation in intellectual activities such as crossword puzzles may reduce the risk of Alzheimer’s dementia and mild cognitive impairment later in life.[10]

The act of solving crossword puzzles alone may delay the onset of memory decline by more than two and a half years![11]

People who engage in meditation actually retain more brain cells as they get older than those who don’t.[12]

Mindfulness meditation, specifically, involves being actively aware of your surroundings, and what you are doing, thinking, and feeling at any given time. When one part of your brain observes the other part of you that thinks, acts, and feels, it helps your hippocampus store memories more actively.

Mindfulness activates the areas of your brain responsible for memory, learning, regulating emotions, and processing information. People who engage in mindfulness also have an enhanced ability to see things from different perspectives.

Incorporating mindfulness into your daily routine changes the structure of your brain itself — in a positive way.[12]

Reading is an excellent way to train your brain.[13] To preserve your memory and ward off dementia later in life, make reading a regular, lifelong habit.

Three hundred older adults who were avid readers showed less physical signs of dementia in their brains compared to those who were not.

Besides being able to communicate more easily with people from other parts of the world, learning a foreign language has numerous benefits for your brain. It reduces your risk of Alzheimer’s, dementia, and brain aging.[15]

Because the left and right brain hemispheres exchange information when you speak two languages, it increases your grey matter. Evidence suggests that these changes occur in the hippocampus and cerebral cortex.

These areas are associated with functions like memory, problem-solving, and being able to multitask.

9. Take Up Crafting, Knitting, or Quilting

Like crossword puzzles, knitting, quilting, or crafting also protect your brain from age-related damage. More than 80 percent of knitters battling depression report feelings of satisfaction and happiness after engaging in this activity.[16]

Because these activities involve many different areas of your brain simultaneously, they further develop your creativity, problem-solving skills, and visuospatial processing. They also improve concentration and memory.

Crafting and knitting not only bring stress relief but may also ease pain, anxiety, and depression. Stressful feelings contribute to the brain’s natural aging process. On the other hand, when you do something you enjoy, you release dopamine, a neurotransmitter that acts as a natural antidepressant.

Contrary to what you may have told your kids, playing certain video games may actually help you learn! Some video games can improve spatial memory, visual short-term memory, and brain cell growth, but be careful because some (specifically, shooter games) reduce the brain’s grey matter.

Games that allow you to use spatial strategies — like navigating around in a 3-dimensional space — have the best results for your brain.[17] When you play these spatial video games, you gain new cells in the hippocampus. This small part of your brain plays a disproportionately large role in regulating language, improving memory, and assisting with spatial navigation.[17]

The more grey matter you have, the less likely you are to develop dementia and related brain disorders.[18] So no matter your age, take up video games for a fun diversion.

11. Shake up Your Routine

Not that long ago, scientists believed the brain was incapable of change, and that its decline was inevitable after peaking during youth. We know today that this is not true. In fact, our brains feature a quality called “neuroplasticity — the ability to adapt to new environments.

To stimulate neuroplasticity, it’s important to switch up your routine. That means both trying new activities, and trying new ways of doing the same things you have gotten used to. This helps get you off of auto-pilot, so your brain is actively working. Some ideas include:

12. Try A Natural Nootropic That Works For You

There are many natural nootropics that benefit brain health. A nootropic is any substance that boosts mental acuity or sharpness. That includes boosting your cognitive or thinking skills, memory, focus, and more. Spend some time researching options and then once you decide on one — or a formula with multiple herbs — see how it works with your mind and body. You can also make sure you're getting the right vitamins for your brain.

If you want to boost your memory and keep your brain healthy and active throughout life, try brain exercises. A variety of mentally stimulating brain fitness activities can buffer your brain against the natural aging process.

Social activities stimulate brain growth and health, so try these activities in a group. Join a knitting circle or a book club, or attend a Zumba class with friends. You can even do simple actions, like switching up your morning routine or taking a new route to the grocery store. All of these activities help prevent your brain from shrinking or atrophying, and even stimulate new brain cell growth.

What brain exercises have you tried to keep your mind healthy? Share your experiences below!