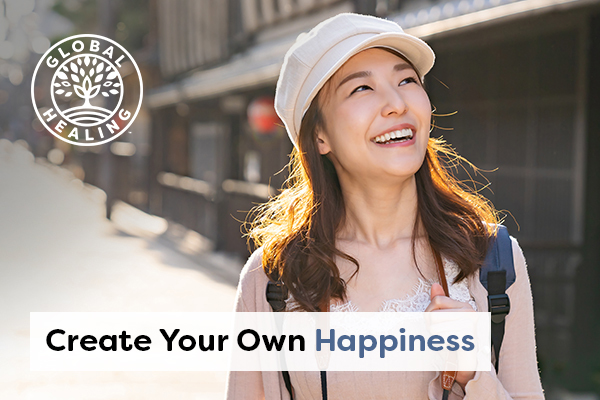 What does happiness mean to you? We all know money can’t buy it, and not even the most enterprising of entrepreneurs have figured out how to bottle it. No matter how hard they try, experts can’t seem to crack the code on how to be happy.

The good news? When you modify your daily routine in small ways, you can increase the neurotransmitter dopamine. One of the main effects of dopamine is boosting feelings of happiness and pleasure.[1] You hold the power to create your own happiness!

Higher levels of dopamine in the brain result in a positive mood. This means there is a relationship between the amount of dopamine your body releases and how happy you feel.[1] That means that by changing small things in your life, you can boost your body's dopamine production and essentially create your own happiness!

How Do I Boost Dopamine to Create Happiness?

There are many ways to increase dopamine levels and create happiness for yourself. Here are our best suggestions.

People tend to base their sense of well-being on the balance between positive and negative emotions.[2] Since increased dopamine is connected to a positive mood, cultivating good feelings can help you create happiness — and it will grow over time.[2]

Wondering how to incorporate the power of positive thinking into your life? Keep a notebook or journal where you write down at least one good thing that happened to you every day. Better yet, write five. Cultivate an attitude of gratitude!

So, banish negative thoughts and focus on the positive. Identify small and big happy moments to shift your focus and increase dopamine.

Fill Your Day With Things You Love

Another simple way to create your own happiness involves filling your day with little things that make you happy. Take a long, luxurious bath before bed. Create for yourself a relaxing, comfortable home with items that spark joy. Give back to others.

Spreading joy to yourself and others gives you something to look forward to. This can fill your emotional reservoir, which can help during not-so-happy moments.

Social worker Michelle K. learned the happiness-boosting power of anticipation when her son was a newborn. "Caring for a new baby can be really hard! I started treating myself to a big cup of coffee after lunch every day," she explains. "It’s a small thing that makes a big difference. Looking forward to drinking it kept my spirits high during tough times."

Get Your Sleep On!

Happy days start with restful nights. Ask anyone who has felt low after a late night or dealt with a cranky kid who missed his nap: sleep quality has a significant impact on mood.[3] A lack of sleep can also trigger junk food cravings, and poor food choices leave you feeling worse.[4] It’s a cycle that you can flip the script on!

When your body does not produce enough dopamine, or the dopamine you have can’t get recycled in the normal physiological processes, you sleep less. So mind your dopamine if you want to get sleep — which will make you happier!

Treat Yourself to a Massage

You can’t buy happiness, but you can pay for a professional massage. Better yet, have your partner do it for free! The healing power of touch will increase dopamine and serotonin while reducing levels of the stress hormone cortisol.[6]

Wisconsin-based art director Curtis W. started getting massages to treat lower back pain, but it didn’t take long for him to notice how uplifted he felt after every session. "I’d walk out of the massage therapist’s office feeling like a million bucks," he says, "and the mood boost would last for days."

Even after his back pain went away, Curtis continued to get regular massages. "Any time I’m feeling low, I schedule a massage. I’m always a happier, more relaxed person afterward."

Looking for a science-backed way to create your own happiness that won’t cost you a thing? Try meditation. Meditation involves sitting still and staying quiet for a period of time — a minimum of five minutes, but preferably ten or longer.

The change in consciousness that occurs when you’re in a meditative state triggers the body to release more dopamine.[7] And this leads to a more peaceful, happier state of mind.

One of the best things about meditation is that it doesn’t require any special equipment or a huge time commitment. It can take some time to learn to meditate, but it’s not hard! Check out our article about Dr. Group, DC’s beginner’s meditation techniques. Meditation is wonderful, simple tool to improve your mood. The more you do it, the better you will feel.

If you’ve felt the so-called "runner’s high" after a great workout — or after a hearty yoga session — you experienced an increase in dopamine.[8] One of the benefits of exercise is that it bumps up serum calcium levels in the body, which enhances dopamine signals and synthesis.[8] The result? A natural "high" feeling.

Retail buyer Joy P. started running because she wanted to lose a few pounds before her wedding, but exercise became much more about her emotional well being than her weight.

"I’m an anxious person, and I was amazed by how much happier and less stressed I felt after running," she says. "Now it’s my therapy. I started running 15 years ago, and I still do it at least twice a week!"

In addition to making lifestyle changes that increase dopamine, your body requires specific vitamins and minerals to produce this neurotransmitter at healthy levels. Certain nutrients found in supplemental form — or in the diet — also promote normal levels of dopamine. Make sure to get enough of the following:

Low D not only reduces dopamine but can also lead to obesity![9] Make sure you get enough. Global Healing’s Global Healing's Vitamin D3 is an organic, vegan vitamin D supplement that boosts brain and nervous system health, has a positive effect on the immune system, and promotes normal dopamine levels.

Calcium and magnesium both play an important role in the pathways by which your brain produces dopamine. People who feel down are often deficient in magnesium and have low dopamine levels.[11]

Nearly half of the people in the United States consume less than the recommended dietary allowance (RDA) of magnesium from their food. So many people have either deficiencies or subclinical deficiencies that global experts call it a public health emergency.[12]

Since both calcium and magnesium promote normal dopamine levels, make sure you get enough of these essential minerals. It will help keep your mood more positive, promoting happiness and joy.[13] They’re often sold together, and the best supplements include calcium: magnesium in a 1:1 ratio, like Global Healing’s IntraCal®.

Curcumin, the main active constituent in turmeric, has mood-elevating properties because it modulates the release of dopamine and serotonin.[17]

When paired with black pepper (piperine), turmeric is better absorbed by the body.[17] Look for a supplement like Global Healing’s Organic Turmeric Raw Herbal Extract™ that contains black pepper as well as Energized Trace Minerals™ to heighten absorption.

The oil of Mediterranean oregano (Origanum vulgare) can lift mood because of the way it interacts with the body system that produces dopamine.[18] Oregano’s active ingredient, called carvacrol, has many promising health benefits.

When used regularly, carvacrol may promote normal dopamine and serotonin levels in the prefrontal cortex and hippocampus, parts of the brain involved in behavior and thought processes.[19]

You may not be able to buy happiness, but you can create your own! Lifestyle choices like positive thinking, filling your day with things you love, getting enough sleep, treating yourself to a mood-lifting massage, meditating, and exercising regularly can boost dopamine — and your happiness.

Using supplements to support normal dopamine levels is a powerful way to promote happiness. Vitamin D, magnesium, probiotics, ginseng, turmeric, and oregano are all great for this happiness boost.

What do you do to create your own happiness? Do you have any tips on how to increase dopamine naturally? We’d love to hear about what works for you.