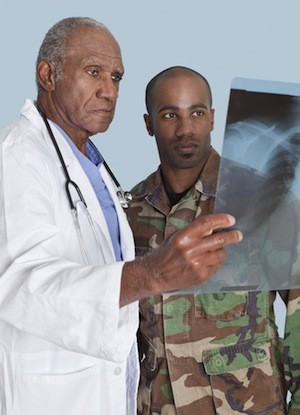 Chronic, physical pain resulting from serious trauma, and even "less serious" injuries, affects many soldiers and veterans. In many cases, the pain interferes with normal function and the ability to perform daily duties. Unfortunately for many, chronic pain is written off as a new way of life for which strong narcotics are prescribed. This is unacceptable and we can do better. Although the situation has many angles, one positive light is that chiropractic care has been made available to all veterans and soldiers.

The Prevalence of Pain in the Military

According to Dr. Erff of the Carl R. Darnall Army Medical Center Pain Clinic, the very nature of the job puts soldiers at an increased risk for developing chronic pain.[1] The regular demands and stress are often multiplied when the tough-it-out mentality does not seek medical attention until serious, chronic pain results... and it often does. Cumulative stress, single-event trauma, and surgery are all contributing factors. Although these will likely remain a constant of military service, chiropractic care may be a very helpful solution.

The Need for Alternative Treatments

Painkiller use and abuse is a concern among active duty military and veterans. From 2001 to 2011, the use of opioids like hydrocodone by military personnel and veterans rose 56%. There's no denying that opioid painkillers do relieve pain, but at what cost? They can be extremely addictive and often come with serious side effects. As one veteran noted, "my life revolved around when my next pill would come."

Unfortunately, death from painkillers affects many military families. For example, in the counties surrounding Fort Bragg, 395 deaths have been tied to opioid painkiller use since 2000.[2] Many of those tragedies are young people (in their 30's) with young families.

How Chiropractic is Helping

Chiropractic Therapy for Back Pain

Back pain, especially chronic back pain, can make life miserable, and it's common in the military. Randomized trials have found that spinal manipulation can be effective for lower back pain. One 2013 study specifically evaluated chiropractic therapy with general medical care in military personnel, 18-35 years old. The results suggest reduced pain and improved physical well-being and function as compared to patients who only received the standard care.[6]

Chiropractic is Relieving Neck Pain, Too

Neck pain is another common complaint among military personnel. A study from the University of Pennsylvania Spine Center found that chiropractic care, along with other alternative therapies like acupuncture, massage, yoga and T’ai Chi, had positive results in addressing neck pain.[9] Not to be left out, the VA of Western New York also examined the effectiveness of chiropractic care for neck pain among 54 veterans who reported significant and meaningful improvements after an average of about 9 sessions.[10]

While studies continue to reaffirm the effectiveness of chiropractic care for back and neck pain, chiropractic is effective for other health concerns as well. This is great news for our soldiers, front-line and otherwise, as chronic pain can affect the entire body and it's often just part of the job. Have you ever had to carry a 60-100lb pack every day?[11] Many military personnel do, and such demands are hard on the entire body.

Chiropractic care can be a very effective alternative to painkillers and provide real long-term relief absent of the side effects that accompany prescription drugs. Now that care is accessible to active duty personnel, we need to promote awareness and use among veterans and active duty members. Considering the dangers of painkillers, it just may save a life.