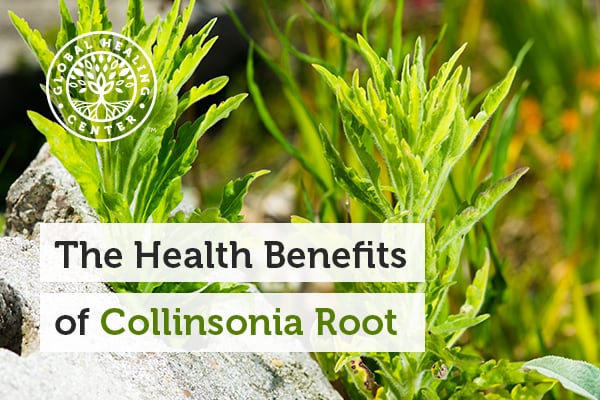 Collinsonia canadensis, also known as Canada horsebalm, hardhack, horseweed, richweed, ox-balm, and stone root, is an herb in the mint family. Historically, it has been used for improving circulation and congestion, especially in the bowels and throat. It has also generated much interest for being helpful in keeping mucous membranes healthy and improving digestion. In the past, it was an extremely valuable ingredient in many types of throat remedies. In particular though, due to its usefulness in promoting circulation, it is believed to be valuable in relieving hemorrhoid symptoms.

Collinsonia root is believed to help with a variety of circulatory conditions, including easing hemorrhoid pain. It is believed to help with rectal irritation by resisting the swelling of rectal veins. It's also known to assist in blood flow by alleviating blood vessel contraction, strengthening vein walls, and assisting with the reduction of blood pooling. Many people, who have circulatory concerns that cause them to feel cold all the time, even when the weather is warm, use this herb to gain relief from chills.

The Antioxidant Action of Collinsonia Root

Collinsonia possesses strong antioxidant properties, containing the beneficial elements of saponins, organic acid, mucilage, tannins, and resins. These substances help support blood vessel tone, organ tissues, and fluid levels. By assisting the body in overcoming circulatory conditions and stress, Collinsonia supports lung and heart health. It has a natural ability to assist in the removal of excess fluids. Because of this, some people also use it to maintain urinary health.

Benefits of Collinsonia root extend to the throat and the larynx. Since the late 19th Century, many natural health practitioners have relied upon Canadensis for a condition that was once known as “minister’s sore throat.” This condition was observed to result in those who, like ministers often did in the late 19th century, spoke for prolonged periods in a strained, ecstatic, or exaggerated tone of voice that resulted in congestion of the vocal cords. This condition would then produce a sense of restriction, coughing, and even the inability to speak. People with this condition reported immediate relief after taking Collinsonia Root.

Many today tend to use Collinsonia root to relieve the heartburn and painful digestion associated with circulatory stress. In fact, it appears to help with several conditions that often impact the entire digestive process. Reports have circulated that it helps relieve symptoms of diarrhea, constipation, and flatulence. Athletes have used this herb to help them regain energy after intense performances that led to overexertion.

A number of mental issues appear to be alleviated by this herb as well. Overall feelings of happiness and decreased nervousness have been reported by a number of users. Other reports also mention increased female libido, better energy, and better skin.

A recent study conducted by Dr. Thiel, a natural health practitioner in Arroyo Grande, California, reported that Collinsonia was one of the several herbal ingredients that were given in capsule form to a test group of subjects. Of that group, 91.7% reported improvement with conditions of nervousness/anxiety, 100% reported relief from feelings of panic, and 97.4% reported an improvement in their overall feeling of well being.

Other Benefits of Collinsonia Root

The benefits of Collinsonia root are available from both internal and topical applications. As a poultice, it has been used for bruises, joint aches, and sprains. The flowers and leaves of the plant have also been used to relieve headaches and body odor. Taken internally, it helps with headaches, cramps, and indigestion. Others have used it for kidney and urinary benefits. Other applications include easing the symptoms of sore throats, helping to clear chest congestion, assisting with digestive difficulties, and eliminating constipation.