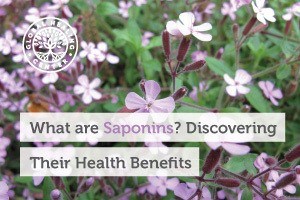 Saponins are naturally occurring plant glycosides; which is to say they are phytochemicals – chemicals found in plants. They possess soap-like qualities and produce a lather when mixed with water.[1]

The word saponin is derived from sapo, Latin for “soap.” True to its name, the root of the Saponaria, or soapwort plant, has been traditionally used as soap.[1]

Why Are Saponins Beneficial?

Saponins have a unique chemical structure that produces foam when mixed with water, just like a detergent. And, also like detergent, saponins can bind with water as well as fats and oils. This means that, in the digestive tract, saponins produce an emulsification of fat-soluble molecules. Specifically, saponins bind to bile acids and help eliminate them from the body, preventing cholesterol from being reabsorbed. You might even say saponins “wash away” various toxins.

What Are the Health Benefits of Saponins?

The unique chemical structure of saponins allows them to offer a number of prospective health benefits. It’s believed saponins have a favorable effect on cholesterol, can help boost the immune system, have an antioxidant effect, and may even support bone strength.

Saponins seem to help promote normal cholesterol levels. The body uses cholesterol to produce the bile necessary for digestion. Saponins bind with bile and prevent cholesterol from being reabsorbed back into the bloodstream; rather, it’s simply excreted. Many cholesterol medications operate in the same way.

In nature, plants rely on saponins as a mechanism to fight parasites. Similarly, when consumed by humans, saponins provide a similar defense against harmful organisms. One study demonstrated this action against Candida cells, specifically.[6] In another study, a specific type of saponin was observed to have antimicrobial activity that favorably influenced oral health.[7] The ability of saponins to act as a broad, frontline shield reduces the burden on the immune system.

It’s important to realize that most of the research into the effects of saponins on cancer cells has been preliminary and involved specific enzymes, proteins, or other components of saponins extracted in specific ways and matched against specific cancer cells under specific situations. In other words, it’s not quite as simple as eating a handful of soapberries and thinking it will cure cancer.

Other Health Benefits of Saponins

Investigations into saponins have yielded a number of other, interesting revelations about their qualities. Preliminary research from a 2010 study concluded that saponins from Terminalia arjuna (arjun tree) may offer a therapeutic benefit for kidney or urinary stones.[12] In a 2015 issue of Natural Products Research, it was noted that, in the past ten years, several preclinical reports have suggested that saponins may offer hope as a natural solution for depression.[13]

Other positive qualities of saponins include supporting Kupffer cells in the liver and encouraging normal detoxification. Saponins found in oats and spinach support digestion by accelerating the body's ability to absorb calcium and silicon. In animal studies, saponins have been found to promote balanced blood sugar and support normal bone density.[14, 15]

Where to Find Saponins

Saponins are a component in over a hundred different types of plants and foods including beans, chickpeas, peanuts, quinoa, and soy. Saponins exist in nightshade vegetables like tomatoes. Herbs like ginseng, Tribulus terrestris, jiaogulan, bupleurum root, osha, and collinsonia also contain saponins.

Saponins are common in food products, often added as an emulsifier. Some carbonated beverages like root beer rely on saponins extracted from yucca and quillaja to produce a foamy head.

The berry shell from the soapberry plant can be used as a natural laundry detergent. The hard shell, which resembles a nut, releases saponins when it absorbs water, acting as a detergent to release grime, dirt, and oil from clothing.