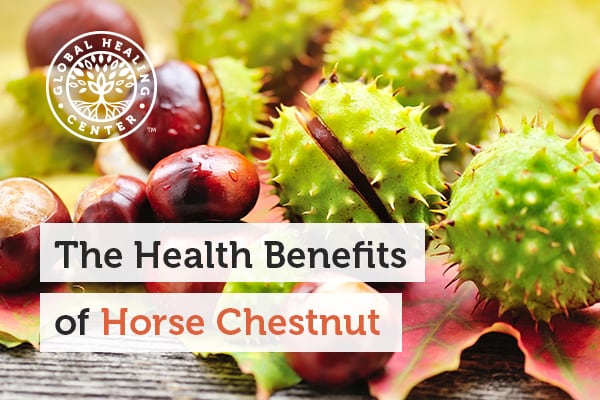 Many indigenous cultures have used herbs and plants in therapeutic capacities to address health issues. This is a tradition and practice that extends to nearly every continent and includes nearly every culture and gives new meaning to "living off the land." Fortunately, in spite of the advertising and brainwashing initiatives by the pharmaceutical industry, this habit has also taken root in America and over half the population uses some form of herbal therapy. Do you favor herbal remedies and suffer from poor circulation or other vascular conditions? You may be interested to learn about horse chestnut, or aesculus hippocastanum, a tree which contains compounds that may offer relief.

What is Horse Chestnut?

Horse chestnut is a tree native to the Balkan Peninsula but found throughout the northern hemisphere. Horse chestnut seeds, leaves, bark, and flowers have been used for centuries to help relieve an array of health concerns. Horse chestnut seed has a place in European phytotherapy and is used to address vascular issues. A tea made from horse chestnut is a staple of Turkish folk medicine and used to relieve an upset stomach and pass kidney stones; they also use the seeds to alleviate hemorrhoid symptoms. [1] Today, horse chestnut is primarily used as a traditional remedy for vascular concerns like chronic venous insufficiency, or CVI, a condition in which the veins do not efficiently return blood from the legs to the heart.

Why is Horse Chestnut Effective?

Horse chestnut contains a compound called aescin which has several observed prospective benefits. Research out of China suggests that aescin is resistant to systemic redness. It's not uncommon for some compounds to temper redness by suppressing the immune system, since it can be a response from the immune system. Aescin resists redness and swelling without being immunosuppressive. [2] Aescin has also exhibited very strong antioxidant activity. Middlesex University in England published information that showed horse chestnut extract to be one of the most effective free radical fighters available. Additionally, Aescin is also a saponin, which is a word you may have heard before in conjunction with natural soap products. More than providing a natural clean, saponins also help the vascular system by making capillaries less fragile. This is likely to be of tremendous interest to persons who experience the swelling that results when fragile capillaries leak fluid. [3]

CVI is a condition in which ill-functioning valves prevent blood from efficiently circulating away from the extremities. There are different causes of CVI but the most common include deep vein thrombosis and obesity. CVI is often identifiable by itchiness, increased leg pigmentation, swelling, varicose veins, and even ulcers. The most common treatment is to wear compression socks. Made of a tight elastic, compression socks do exactly as their name implies, they compress the veins and arteries which decreases the size of distended veins. This increases pressure on the arteries and forces more blood to circulate. All this allows less blood to pool in the feet and legs.

Studies have shown that horse chestnut extract provides a similar effect to compression socks and helps to contract veins and arteries. [4] According to the Journal of the Norwegian Medical Association, horse chestnut seed extract is widely used throughout Europe for chronic venous insufficiency (CVI). [5] Italy's University of Milano performed research that showed aescin to be as effective as compression therapy for CVI and, additionally, aescin is significant for not just CVI, but also hemorrhoids and edema. [6] Why? At the lowest level, horse chestnut seed extract is thought to inhibit the breakdown of capillary wall proteins. [7]

The Institute of Medical Biometry and Medical Informatics at Germany's University of Exeter reviewed available information and found that while traditional CVI treatment consists of compression therapy, compression therapy can be painful and susceptible to compliance issues. In these instances, oral medications may provide the most promising outlook and the positivity of that scenario increases when the medications are from natural, plant sources like horse chestnut. In their review, researchers were quick to note that the symptoms of CVI improved when an extract of horse chestnut was used. [8]

Another German study involved 22 patients with CVI who were given capsules with either an aescin extract or a placebo. Those who took the aescin extract noted a "compression like" effect in the form of decreased intravascular volume; supporting the argument for horse chestnut's benefit for venous concerns in the legs. [9]

The University of Oklahoma Health Sciences Center evaluated various approaches to dealing with vein and circulation concerns. Compression therapy and topical creams have been shown to reduce pain and swelling but their long term application and benefit is questionable. Obviously, the best long term solution is to address potential causes at the root, especially if obesity or type 2 diabetes are a factor. Absent that, researchers noted that herbal supplements like horse chestnut may have much to offer for improving symptoms of CVI. [10]

The research into horse chestnut benefits has, fortunately, observed very few adverse side effects. To the contrary, horse chestnut is thought to be remarkably safe and well tolerated by most people. Some research has shown that aescin is more absorbable by the body during the daytime than night- something to consider if you supplement with horse chestnut. [11]

If circulation and vein health are a concern in your life, I encourage you to take inventory of yourself and determine if there are any factors you can change to get those issues under better control. Are you eating healthy? Are you exercising enough? Would losing a few pounds put you in a better spot? When was the last time you cleansed your body? Sometimes those are factors, sometimes they're not. Regardless, if lifestyle choices aren't putting you where you want to be, Hematrex® contains organic horse chestnut and is the only vein and circulatory support supplement I recommend.