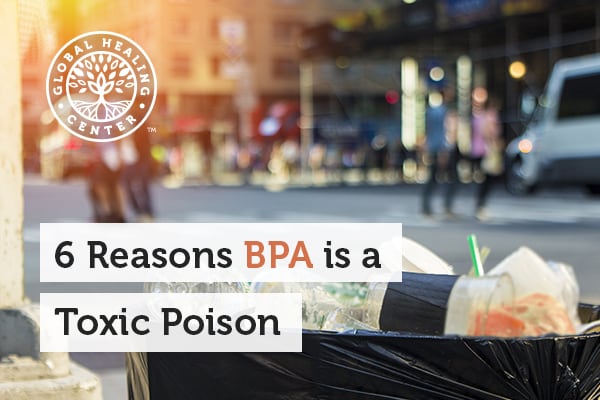 I’m sure just about everyone has heard of BPA, but many people are still confused about its presence and safety risk. Simply put, bisphenol-A is a synthetic compound used in plastic and epoxy resins. What does that really mean to you? Think about everyday items like water bottles, sports equipment, CDs, and DVDs. On the epoxy side, you might have BPA lining the inside of food cans and water pipes, or in thermal paper (the kind used in receipts). Studies indicate the majority of Americans test positive for BPA. [1] Why is this a concern? Well for one thing, BPA can lead to endocrine disorders or other health concerns. I’m going to run through 6 reasons why you’re much better off without this compound and some simple advice for how you can avoid BPA.

Why You Should Avoid BPA

1. BPA is Especially Dangerous to Women

Recent evidence suggests that BPA is toxic to a woman’s ovaries. [2] One study found that after exposure, follicle production was fewer and smaller as the production of estradiol, a hormone necessary for normal reproductive development, had become stunted. [3] There’s even evidence suggesting that BPA exposure can shorten the reproductive lifespan and lead to infertility. [4]

In addition to being harmful to a woman’s reproductive system, there’s evidence suggesting that exposure can also cause issues for the unborn child during pregnancy. [5] In a study of mothers and infants, the mothers with higher levels of BPA had children with decreased lung function. According to the study, each tenfold increase in the average BPA concentration corresponded to a 14.2 decrease in lung function. [6] The study also noted that the children were more likely to develop persistent wheezing by age 5, suggesting the very scary idea that an expectant mother’s BPA exposure can actually affect her child’s lung development.

Years ago, there was a concern that drinking from water bottles left in hot cars increased cancer risk. That was never proven, but what is certain is that toxic levels of BPA seep into water from plastic. For over four weeks, scientists studied plastic water bottles left in three different temperature conditions. The highest temperature — 158 degrees Fahrenheit — was chosen because car interiors can easily reach that on a hot day. In the hottest bottles, there was an increase in levels of BPA, suggesting that the levels of this poison steadily increase over time. [7]

It’s bad enough that BPA is in so many items, but recent evidence even suggests it’s polluting the environment. Chemical companies often use BPA as a plasticizer to make plastic stronger and, in 2013, over 26 tons of the stuff was released into the air. What does that mean for us? Well, not only do we have to worry about ingesting BPA or absorbing it through the skin, inhalation is also a concern. In fact, one study found that BPA is everywhere. [8] To give you some more perspective, another study found BPA in everyday household dust. [9]

Here’s another reason to avoid BPA: a study suggests that it can cause a small spike in blood pressure, something that could cause concerns for those with hypertension. The Korean study followed 60 individuals as they drank the same brand of soy milk from BPA-free glass bottles and BPA-lined cans. Each individual was studied three times: as they drank from the bottles, as they drank from the cans, and as they drank from each. Not only was there an increase in systolic blood pressure when drinking from the cans, urinary concentration of BPA increased following consumption of the canned beverages by more than 1,600 percent compared with the consumption of the glass bottles. [10]

6. BPA is Confusing the Government

While it's bad enough that it's wrecking our health, it also seems to have a firm hold on the minds of our officials. Although the EPA recognizes that BPA is dangerous, the FDA says it’s safe. The EPA just recognized BPA, along with 22 other toxins, as a health risk; however, the FDA takes a markedly different approach. [11] While the agency recognizes that BPA is normally ingested, exposure levels are negligible and not a concern. [12] The FDA even claims that there is no risk to the unborn child. They cling to the belief that BPA is safe despite the number of studies suggesting otherwise.

Avoiding BPA is a must, but be careful – a product with the BPA-free label doesn’t automatically mean it’s safe. Bisphenol-S (BPS) is a common replacement for BPA. Initially used because it was thought to be more resistant to leaching, BPS is just as bad. Once it gets into the body, it parallels the actions of BPA. [13] It seems as if BPA-free plastic might be just as harmful. So what can you do for your health? Make the smartest choice available to you and choose glass containers.