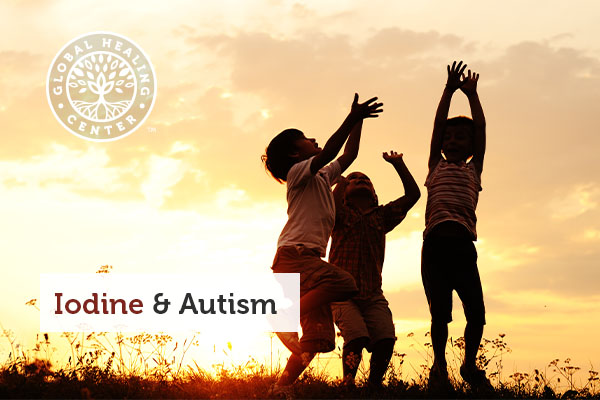 Although scientists have yet to determine the exact origin of autism, some research has shown a potential link between iodine deficiency and autism.[1] Because of this, many alternative health care practitioners are looking at methods that involve nutrition, detoxification and iodine supplementation. Over the past two decades, the incidence of autism spectrum disorder rates among children has skyrocketed. The Centers for Disease Control and Prevention estimates one out of every 88 children in the U.S. will display autistic symptoms.[2] This is astonishingly high.

The Link between Iodine Deficiency and Autism

Proper thyroid activity doesn’t happen without adequate iodine levels. The hormones produced in a well-functioning thyroid support metabolism and normal immune health.[3] There is direct a link between the underproduction of thyroxin in the thyroid and weakened neural connections in the brain.[4, 5] Some have questioned if mothers with lowered iodine levels are more likely to produce offspring with neurological imbalances such as ADHD and autism.

Children with autism, and their mothers, consistently have lower iodine levels.[6] The American Thyroid Association urges pregnant mothers to take iodine supplements, one reason is to ensure the mental health of their offspring.

Research conducted by James Adams at Arizona State University included hair analyses on 51 autistic children, 29 mothers of autistic children, and a control group. This study found that iodine deficiency in mothers could be a cause or exacerbating factor for autism. The study also found that children with autism spectrum disorder had up to 45% lower levels of iodine than the control children. According to a NHANES survey, average iodine levels in the US population are 50% less during the period between 1988-1994.[1, 7]

An Italian study found that women from an iodine deficient area of the country had reduced levels of thyroid hormones when compared to women who lived in iodine rich areas.[8] Researchers hypothesized “the imbalance of maternal thyroid hormone homeostasis during pregnancy was a consequence of endemic iodine deficiency may be responsible for the impaired psychoneurological development observed in children from that area. Appropriate iodine and/or thyroxine prophylaxis to women in that area may prevent the neurobehavioral, cognitive, and motor compromise of that population.”[9]