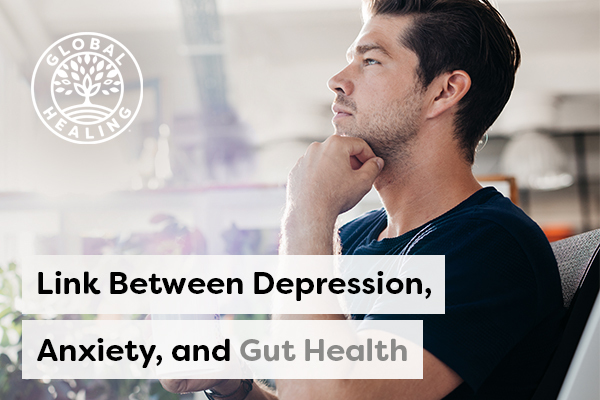 Did you know your gut health may affect your mood and behavior? The belief that gut health is connected to mental well-being dates back more than a hundred years. In the early 1900’s, scientists and clinicians emphasized the relationship between gastrointestinal health and mental health. By 1930, opinions reversed and it was thought that mental health disorders were an influencing factor in gastrointestinal disorders.[1]

The interest in gut health has never been stronger and the exploration into the gut microbiota has revealed a close relation between behavioral issues, mood, and bacteria imbalance. There are a number of factors that influence the condition of the gut microbiota and gut environment, diet is a major one.[2] Immune system health is also closely associated.[3]

How Your Gut Is Connected to Your Brain

The gut is connected to the brain via the vagus nerve, the enteric nervous system, and the gut-brain axis. The vagus nerve extends from the brain stem down into the neck, thorax, and abdomen. The nerve exits the brain stem through rootlets in the medulla that are caudal to the rootlets for the ninth cranial nerve.[4] The vagus nerve supplies motor parasympathetic fibers to all organs except adrenal glands, all the way from the neck down to the second segment of the transverse colon. It helps regulate heart rate, speech, sweating, and various gastrointestinal functions.

The enteric nervous system connects with the central nervous system. It contains 200-600 million neurons.[5] Local and centrally projecting sensory neurons in the gut wall monitor mechanical conditions in the gut wall. Local circuit neurons, on the other hand, integrate this information. This enables motor neurons to influence the activity of the smooth muscles in the gut wall and glandular secretions such as digestive enzymes, mucus, stomach acid, and bile.[6]

Finally, the gut-brain axis consists of bidirectional communication between the central and the enteric nervous system, linking emotional and cognitive centers of the brain with peripheral intestinal functions.[7] There is strong evidence from animal studies that gut microorganisms can activate the vagus nerve and play a critical role in mediating effects on the brain and behavior.[8]

The Role of Bacteria in Depression and Anxiety

Research has shown the gut microbiota influences brain chemistry and behavior.[9] For example, people who suffer from irritable bowel syndrome (IBS) and the associated cramping, abdominal pain, bloating, gas, diarrhea, and constipation, commonly suffer from depression and anxiety as well.

The interaction between bacteria and depression and anxiety goes both ways. For example, researchers concluded that daily stress might increase vulnerability to disease, ranging from depression to irritable bowel syndrome.[10]

Gut microbiota influences serotonin and dopamine production. In fact, more than 90 percent of the body’s serotonin is found in the gut. Serotonin is a key regulator of gastrointestinal motility.[11] Serotonin is also one of the “feel-good” neurotransmitters and contributes to feelings of well-being and happiness. In fact, the enteric nervous system makes use of more than thirty neurotransmitters, including serotonin, dopamine, and acetylcholine. Even probiotics may have a therapeutic effect on anxiety and depression symptoms.[12]

How to Aid or Restore Your Gut Flora

Following a healthy diet is one way to encourage a healthy gastrointestinal tract. Base your diet on fruits and vegetables. Add fermented foods, such as kefir and sauerkraut, to your diet for a good, natural source of probiotics.