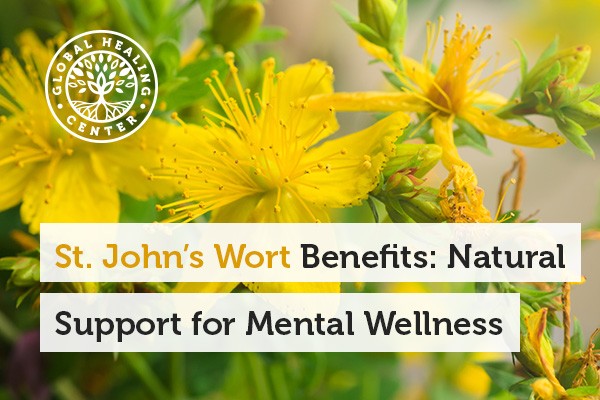 With one out of every 10 American adults actively taking an antidepressant, promoting mental health through natural means has never been more important.[1] A healthy, organic diet and regular exercise are critical for laying the foundation of healthy living. Herbs like St. John’s wort (Hypericum perforatum) are a source of antioxidants and other specialized nutrients that encourage physical and mental wellness. In fact, for centuries, people have turned to St. John’s wort as a natural remedy for an array of health concerns. Let's take a closer look at its history and benefits.

Because of St. John’s wort’s ability to encourage a pleasant mood, much of its history includes superstition and spirits. The traditional Greek use was to hang the plant over religious paintings and statues to ward off “evil spirits.” Greek herbalists saw other uses for the plant and created tinctures to help with cuts, burns, harmful organisms, and even snakebites.[2]

The mysticism surrounding St. John’s wort carried over to early American settlements where the plant was often sewn into door wreaths to drive away unfriendly spirits. Settlers also believed that the herb would induce a confession if placed in the mouth of a suspected witch.[3] Today, most of the superstition that surrounded the plant is long forgotten and it's understood that the plant's ability to influence mood and temperament is owed to its nutritional components.

St. John’s wort has shown promise in relieving symptoms of depression. Depression can present itself in many different ways and is often described as a persistent feeling of extreme unhappiness. Left unchecked, it can affect sleep, appetite, energy, cognitive function, and even the immune system. Persistent or major depression is typically due to a chemical imbalance in the brain.

Selective serotonin reuptake inhibitors (SSRIs) are one of the most commonly prescribed antidepressants. They work by targeting serotonin, an important neurotransmitter that affects mood. SSRIs increase serotonin levels by blocking serotonin re-absorption in neurons. In theory, this can increase the amount of available serotonin in the brain and improve the transmission of messages between nerve cells. Unlike SSRIs, St. John’s wort inhibits the reuptake, or re-absorption, of all neurotransmitters including monoamines, dopamine, and noradrenaline, and the amino-acid neurotransmitters GABA and glutamate, making them more available.[4]

Nearly 30 international studies report that St. John’s wort works better than placebo for those experiencing mild to moderate depression. However, other studies found it less effective at addressing more severe kinds of depression. Many doctors in Europe recommend St. John’s wort to patients who experience mild to moderate depression,[5] and it is a popular natural remedy for the blues in North America, as well.

Over 80 percent of women in the United States have experienced premenstrual syndrome (PMS).[6] Common symptoms of PMS include headaches, bloating, and fatigue. Women who suffer from more severe symptoms may have premenstrual dysphoric disorder (PMDD). Symptoms of PMDD include depression, mood swings, and anxiety. One double-blind, placebo-controlled trial found that St. John’s wort was effective at positively influencing physical and behavioral symptoms associated with PMS. More severe symptoms such as anxiety, depression, aggression, and impulsivity remained unchanged following St. John’s wort supplementation. More research should shed light on whether long-term supplementation is useful for PMS or PMDD symptoms.[7]

Menopause is associated with a natural decrease in reproductive hormones in women around ages 48 to 55. The symptoms of menopause include hot flashes, sleep disruption, moodiness, and a reduced sex drive. St. John’s wort could help address several of these symptoms. Women reported a decrease in the severity, frequency, and duration of hot flashes after taking St. John’s wort extract daily for eight weeks.[8] Another group of women ages 43 to 65 reported improvements in sexual well-being after taking St. John’s wort extract.[9]

Other Benefits of St. John’s Wort

Over the course of a month, St. John’s wort encouraged wound healing in ICU patients.[11] The plant’s soothing action and resistance to harmful organisms[12] is a possible explanation for its ability to encourage healthy skin.

You can find St. John’s wort in a variety of forms, including pills, powders, and liquids. While carefully measured extracts assure potency, you can also make tea with the fresh flowers from the plant. St. John’s wort tea is easy to make; simply steep a handful of flowers in hot water for four minutes and strain.

St. John’s wort can interact with prescription medications; it can reduce the effectiveness of birth control pills, heart medication, and even some HIV and cancer drugs.[5] Side effects are rare but do occur. These include dry mouth, upset stomach, increased sensitivity to light, and increased feelings of anxiety. Like any supplement, use by pregnant or nursing women and children is not recommended without clear instruction from your personal, trusted healthcare advisor.

There are many natural alternatives to support mental wellness. Nutritional approaches to mental health can have a huge impact on how you look and feel.

Consuming the right food that is whole, organic, and nutritious supports a positive mental state. Daily exercise, like yoga or walking, is extremely effective at encouraging physical and mental health.[13] No matter your physical shape, adequate sleep and daily meditation can work wonders for relieving feelings of anxiety, boosting mood, and clearing the mind.[14]