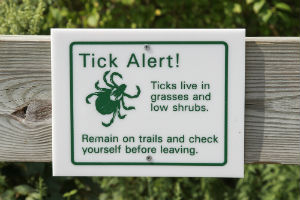 We'd all like to hope that going to the doctor always resulted in honest treatments, perspectives, and efforts. After all, we're talking about the health, well being, and lives of patients. Patients who are mothers, fathers, daughters, sons, grandparents, and friends. Patient care isn't like servicing a broken refrigerator; there is a human element involved and that has to be acknowledged. In some cases, undeniably, the medical profession does exhibit the level of care and respect it should. In other cases, it doesn't. Perhaps one of the most tragic examples of this is with regard to chronic lyme disease.

I was recently conversing with a woman who was observing, first hand, the multitude of unbearable side effects of this disease. A friend of hers had been camping on the Texas/Louisiana border about six years ago when she was bitten by a tick and contracted lyme disease. The diagnosis did not come until months after the disease had progressed, a lot. Part of the initial concern was the reluctance for the medical community to recognize that the disease was even possible to contract in those parts.

Politics are Part of the Concern

Politics are a blight of the already dismal lyme disease landscape. If you haven't seen the documentary Under Our Skin, I would encourage you to do so. It tells the often-muted, ugly side of chronic lyme disease and is a hard hitting portrayal of what life is like for people experiencing this terrible disease. It's not uncommon for them to see numerous doctors and be prescribed various antibiotics and other pharmaceuticals, and "complete" a slew of "effective" protocols, to then be told they're cured (when they're not) or that they're just crazy. Some of these victims are wheelchair bound, barely function, and look terrible, yet some doctors out there have the gall to accuse them of making it all up.

We Need Science, Not Politics

Mainstream medicine has been denying the existence of chronic lyme disease for years. This is a completely unnecessary debate that has raged on and resulted in a number of doctors, who do acknowledge and treat chronic lyme disease, being sanctioned by politically-biased medical boards or labeled as criminals. What's really maddening about this is that new research has shown that monkeys with lyme disease still have the disease despite being treated with all the "approved and effective" antibiotic protocols. [1]

This means chronic lyme disease is a reality, and, unfortunately, it's a confusing reality that isn't completely understood. This is what leads some to label experimental or alternative treatments as, "abunchajunk" or just hold tight to opinions like, "Well, that didn't work for a guy my cousin knows so that's that."

Changes in Perception are Necessary

Modern medicine is great for situations like pain management and repairing trauma. If you're riding your bike and fall 70 feet down a steep, rocky hill and get smashed up, by all means, get to the hospital and let them alleviate your pain and put you back together. However, for chronic conditions, particularly lyme disease, the advances are disappointing; and until lyme disease can be fully explored, free of political and ulterior bias, it's a situation that won't improve.